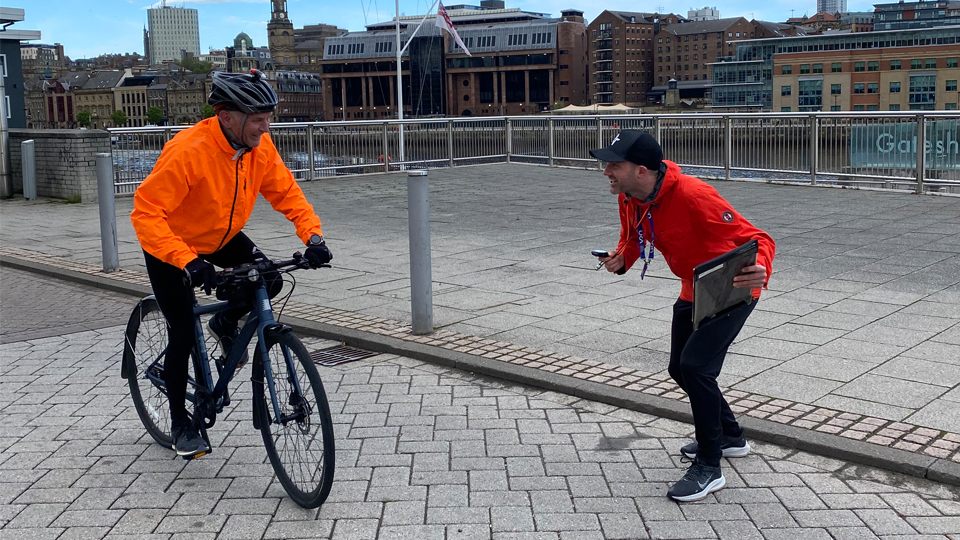 One of the North’s most famous runners has quit 10 years in retirement to race at Gateshead’s first-ever half marathon later this month (30 May). Veteran athlete and local legend Steve Parr, 62, represented England at cross country and on the roads, was ranked the UK’s No.1 steeplechaser, and famously beat Steve Cram in 1987. But despite winning countless medals and honours in his career, he couldn’t resist one fresh challenge, from his son Chris – to start the Gateshead Half Marathon as 'lead bike'.

Chris, 36, a fellow Gateshead Harriers star like his father before him, also a distinguished athlete and a former Great Britain International middle distance runner, is the half marathon’s race director. He told us the new 13.1 mile event has seen sign-ups boom in the weeks since lockdown restrictions on outdoor sports events were lifted at the end of March.

“A lot of people have been training regularly during lockdown, so they’ll be fit enough to join our race and be raring to go. Now, after people have been cooped up at home for months, huge pent-up demand from runners has built up and we’ve seen a major surge in interest and bookings, over 500 in the past six weeks.

“Hundreds of tickets are still being sold and people can rest assured we’ll be operating strict Covid-safety regulations, with social distancing, staggered starts and finishers picking up their own medals. It’s a huge day for Tyneside celebrating running, sport and healthy exercise.

“We’ve had a huge influx of runners excited about getting involved in this major new event in Gateshead. We had to postpone it three times due to lockdown, but now it’s officially on.”

The route of the road-closed event takes in the picturesque Quayside area, the Gateshead Millennium Bridge, Sage Gateshead, BALTIC Centre For Contemporary Arts, Tyne Bridge and the historic Swing Bridge, and finishes on the track at the stadium.

Former middle-to-long-distance running champion Steve said he was 'immensely proud' to accept his son's request for help on race day - and revealed he'd embarked on a rigorous training regime to beat health issues and had already cycled 20 half marathons in an attempt to get fit in time. He continued: "It’s been more than 10 years since I’ve been involved in a race. I’m coming out of retirement, but on two wheels."

Clearly proud of his son he also said: "With well over a thousand people, it’s a big, big event, with all the hassles of road closures, and dealing with these different councils and different departments. It’s a big thing he’s taken on. I think it’s fantastic."

Chris is feeling proud too:  “It’s amazing to have my Dad involved, especially as he’s spent £1,000 of his retirement money on a new bike specially for the occasion!”

Final word goes to Steve: "As it’ll be my first time doing this, there will be a little bit of nerves. It’ll feel a bit like going back to doing proper racing again, I suppose. When you come to stand on the start line on race day alongside everybody else nervously thinking to yourself: 'Oh, can I keep up with these guys?'

"This time though I've GOT to keep up with all the runners. In fact, I’ve got to keep out IN FRONT of them! So, there’s going to be a little bit of pressure there on the day, yes."