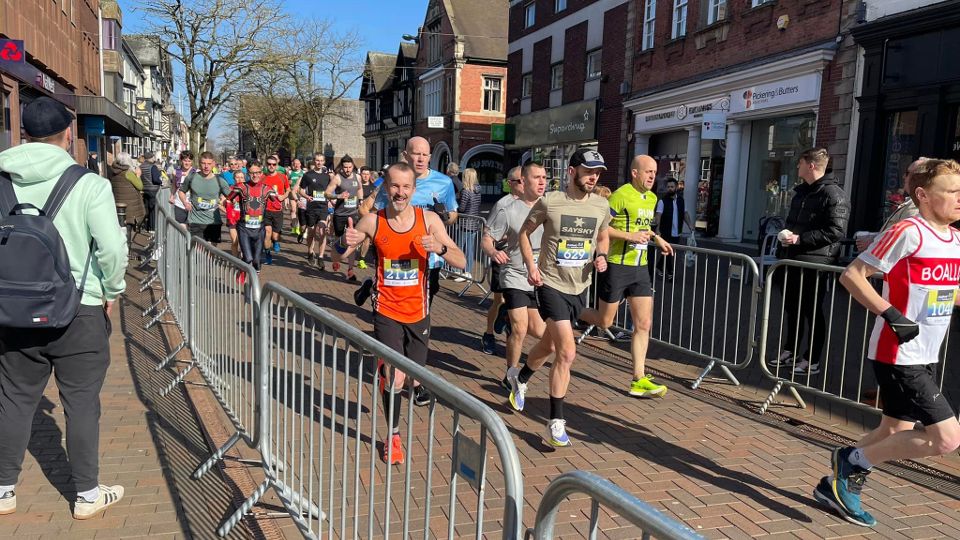 Stafford Half wows the crowds

Locals turn out in force for this year's race.

They say a little support goes a long way but on Sunday 20 March a lot of support went a long way as demonstrated by the local community at the 2022 Stafford Half Marathon. Their encouragement (and possibly the free wine station!) helped many runners to a PB in perfect conditions.

This half marathon is known for its crowds who line the route from start to finish, clapping, cheering and generally motivating the runners as they complete 13.1 miles around this Staffordshire town. They were particularly enthusiastic at the 39th Stafford Half Marathon and Family Fun Run where their support and the weather made it an enjoyable day for the participants.

Everyone lined up according to their estimated finishing time on Earl Street and at 10am away they went, followed by the 1 Mile Family Fun Run at 10.10am.

The course took them up Radford Bank, along Baswich Lane, onto Beaconside, Stone Road; continuing along the Isabel Trail then into Victoria Park before exiting there and gearing up for a sprint finish in the loud and lively Market Square.

Applause greeted Cole Gibbens of Invicta East Kent AC who looked in control as he raced across the line to win in 1:08:57. Oliver Harradence of Royal Sutton Coldfield AC was next in 1:09:28 with Samuel Evans of Preston Harriers third in 1:12:14.

The full set of results is available via the runABC Midlands Race Listings page.

For some, their target times were achieved (thanks to PB Pacers), for others it was about completing their first half marathon but whatever the outcome, the community support played an important part.