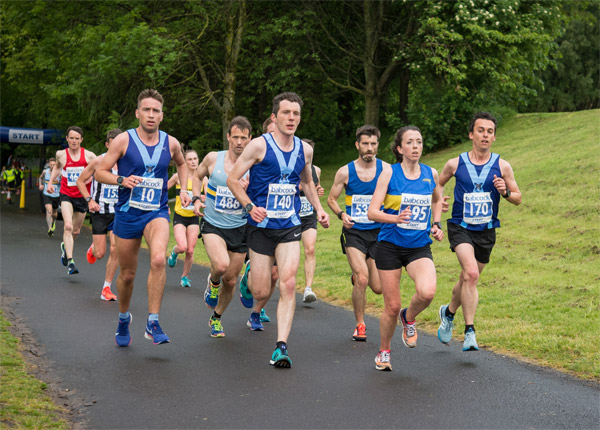 The 2019 Babcock 10K series concluded on a record-breaking note at Glasgow Green when Fionnuala Ross, building on her fast time of 34:00 at Dumbarton 10K, raced to first place at Shettleston 10K on Sunday (26 May) in a new course best of 34:12 taking 13 seconds off her previous mark from 2017.

Ross finished ahead of an international standard field with Fife’s Annabel Simpson in second place and Kilbarchan’s ever consistent Elspeth Curran third. Simpson, who had earlier achieved a win at Helensburgh 10K and a third in Dumbarton, had the consolation of winning the overall series title.

Ross's Shettleston Harriers' club mate Weynay Ghebresilassie made it a home double in the men's race. He followed up his success at Helensburgh 10K with another win. Stuart Gibson of Cambuslang Harriers (31:47) and Peter Avent (31:51) also Shettleston were second and third.

Olympian Sonia Samuels, who had travelled North from Loughborough, collected the women's over 40 prize despite post London Marathon injury niggles. The Rio marathon runner had encouraged Kilbarchan’s Gemma Rankin to overtake her in the finishing straight and Rankin's points contributed to Kilbarchan taking the women’s team title.

Shettleston Harriers, with their big contingent of young prospects, were easy team winners in the men’s event.

Almost 600 entries for the Babcock Shettleston 10k race brought the series entries to 2,100. Series sponsors Babcock were delighted with the feel good community spirit evident on the day which was witnessed by their managing director, Gavin Leckie who clocked a very respectable 42:34.