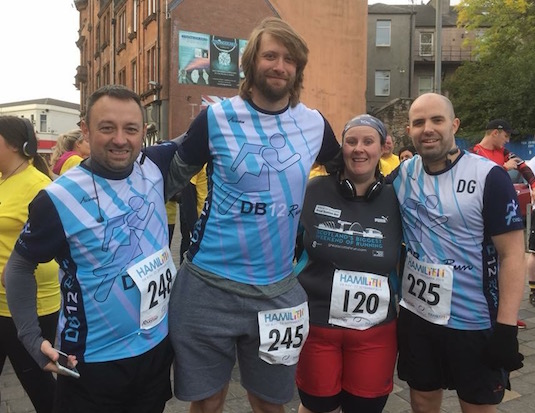 Organising events a piece of cake for DB12Run

For most race organisers, one event a year is plenty. But not for Chris Gray.

With last weekend’s DB12Run Marathon, Half Marathon and House of Shah 6K Fun Run (Sunday, 6 January) barely behind him, the tireless owner of DB12Run, the diabetic community active and events club that raises funds in aid of local charities in Hamilton, is now getting ready for the three different distances (6km, 12k and 18k) that make up their Scotland Race (Sunday, 27 January).

Although clearly in his element, Chris’ path to becoming an organiser is unusual. Three years after being diagnosed with Type 1 Diabetes in November 2008, he fell in love with running. After a few years of taking on everything from 5ks to marathons, he went to a diabetes awards night and listened to inspirational stories about how helping the community changed people’s lives. On that day in 2015, he decided to start up DB12Run.

DB12 – the DB stands for diabetes and the 12 for type 1 & 2 – held their first 6k and 12k races to raise funds for Diabetes Scotland and the Nicola Murray Foundation on 22 August 2015. They’ve not looked back since.

Chris says he tries to achieve a minimum of 12 events a year, each good value, and with a new twist to keep them unique.

He said: "We’ve done 31 events, from Disney and Viking themed events to a Valentine's Day special and a thrift shop event – where runners had to buy a minimum of £10 of clothes from a charity shop and run in them. We also had the first Braille medal in Scotland.

"Everyone who comes to DB12Run can see what the club is trying to do, as well as my passion in creating trophies, medals, club vests and T-shirts.

Thanks to all their runners, DB12 has raised over £6000 for local charities, including the Hamilton Ladies Rugby Team, Ups and Downs for Down Syndrome, Diabetes UK, the Bothwell Cats and Dogs Home and Marie Curie, among others.

These efforts have not gone unnoticed. In 2016 alone he was the proud winner of the ‘Helping Others’ award for Diabetes Scotland and their nominated Fundraiser of the Year. He was also voted one of the top 5 diabetes heroes.

Chris says DB12 are a community of like-minded runners and walkers who love to get active, make friends, share stories and be part of a family. They're not a big club, with an average turnover of 55 runners at their events.

And what's next for the family? Hard on the heels of the Scotland themed run on 27 January will be a 'Beardy McBeardskins' run in February, a 6k/12k/18k 'Three Pound Fun Run' in Strathclyde Park to raise funds for the Animal Cancer Trust (16 February), and another 6k/12k/Half/Full Marathon event in March. After that, Chris will be taking his organising skills on tour, with visits to Aberdeen, Annan and Carlisle. Further details and locations are yet to be confirmed, but one thing is certain ... there will be cake.

Image: Chris (standing tall) with the DB12 crew at HamilTEN