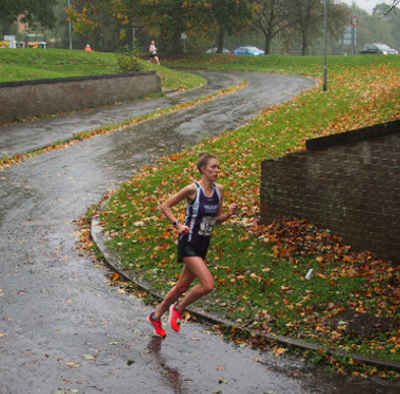 Sunday 14 October was a red letter day for Higham Harriers AC’s Jay Fallaize and Rachel Doherty. They were in winning form at a very wet Daventry Road Runners 10K.

Overcast skies and constant rain made for a gloomy backdrop to this popular club race hosted by Daventry Road Runners. However, the runners were a steadfast bunch and tested themselves on an undulating course consisting of underpasses, roads and footpaths that had been swept clear of leaves the day before by willing volunteers.

There were top honours for another Higham Harriers AC runner in the women’s race. Rachel Doherty won in 38:29 with only two seconds separating her from Vicki Cronin of Trafford AC who was second in 38:31. Kelly Barnett of Wellingborough & District AC was third in 39:44.

There were 326 finishers at this 8th race in the Northampton Road Running League Series. They received a T-shirt, medal and a goody bag in Daventry Road Runners' distinctive purple that contained a variety of items to restore depleted energy levels.