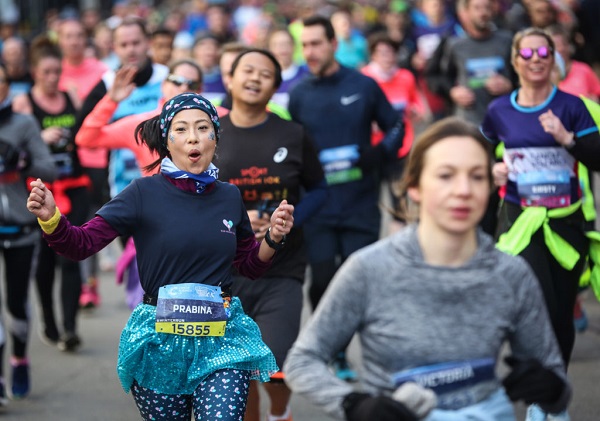 Help freeze cancer in its tracks in London's Winter Run

Just a few individual entries remain for London's coolest and biggest 10K: Cancer Research UK London Winter Run on 9 February 2020. But you really need to get your skates on if you want to experience the obvious runner's high of Prabina Talary (5,861st in 55:31 - pictured above) earlier this year.

Where else could you party with penguins, hug a polar bear, enjoy live music during your run and raise funds to help freeze cancer in its tracks? At the 2020 CRUK London Winter Run the 100,000th entrant will finish and more than £3million will have been raised for CRUK's life-saving work that has helped double cancer survival rates in UK over the past 40 years.

The unbeatable course starts in Trafalgar Square – themed as a winter wonderland – and finishes near Downing Street. The route passes many of the capital's most iconic sights from Nelson's Column to St Paul's Cathedral and Big Ben.

The 2019 official race ambassador was ex-footballer Emile Heskey (56:38 for 6,652nd) who had clearly kept in shape after making more than 500 appearances in the Football League and Premier League and scoring seven goals in 62 England games.