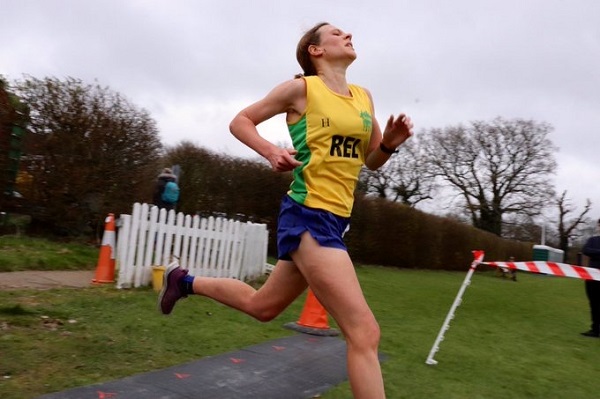 The 10th annual Croydon Half Marathon was held on Sunday (15 March) with 265 runners striving for the magnificent medal pictured below. And there was a special cheer for the host club's Rachel Lindley (pictured above) who dominated the women's race.

Striders of Croydon are based at the Race HQ Sandilands Club, adjacent to the rolling expanse of Lloyd Park, where the distinctive yellow and green strip of club runners is frequently seen.

The two-lap course designed by the local club starts beside Whitgift Playing Fields, just a short stroll from the Sandilands tram stop, and circumnavigates the undulating green space of Lloyd Park and Shirley Park golf course. There can be few healthier routes to run 13.1 miles in a busy town centre setting and that was one of the key considerations for the organisers.

Together with race management team Nice Work it was a case of keep calm and Croydon's on! Pre-race health advice was issued and special measures on the day included the restriction of snacks normally handed out to runners at feed stations and the finish – so no jelly babies or Jaffa Cakes this year.

Despite the lack of on course calories the race was won by Daniel Gaffney, of South London Harriers, in a new course record of 1:10:47, which was 41 seconds faster than the previous record set by Abdi Madar of Newham and Essex Beagles in 2012.

Rachel Lindley got the partisan Striders supporters cheering with a storming victory in the women's race in 1:25:54 from Amy Rollason (South London Harriers, 1:28:45 PB) and W45 Debbie Jackson (Collingwood, 1:29:19).

Nearly 30 runners beat 90 minutes; almost 90 were under 1:45 and 180 finished in two hours. The timekeepers were stood down at 3:13:56 as the final finisher arrived at the welcome sight of the Sandilands sports pavilion.

Images courtesy James Rhodes (above) and Nice Work (below)