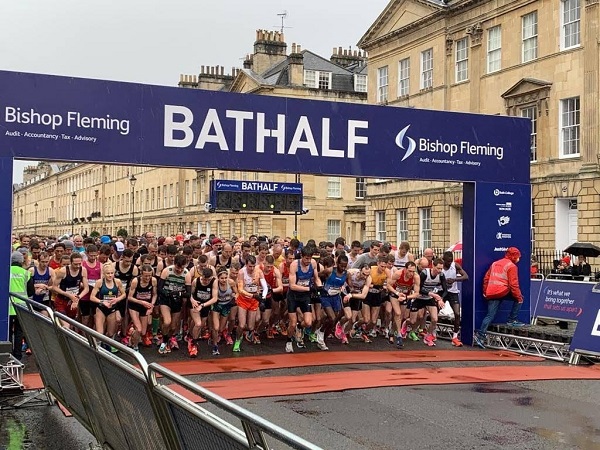 The stand-out stat from Sunday's (15 March) Bath Half Marathon was that despite the mental anguish being caused by growing concerns regarding the Coronavirus outbreak, some 6,827 runners took part and they all finished in just over four hours – that's more than half the number that completed last year's 38th edition of this long-established, popular city centre road race.

Bath Half Marathon issued a 750-word COVID-19 statement on Saturday (14 March) from race director Andrew Taylor, following previous updates on this subject, including advice from Race Medical Director, Dr Rachel Oaten, who works for a local NHS Hospital Trust and is involved in resilience and planning around the virus.

The race went ahead on a sombre morning, with rain and wind adding to the test of running 13.1 miles. The spirit of competition soon enthused the athletes, who might just have been competing in the last mass participation event to be held for a while as plans are being discussed to impose restrictions on such gatherings to help the fight against Coronavirus.

The pace at the front was impressive, with the top 10 men beating 67 minutes. Two of those ducked under 65: Paul Pollock (Kent AC, 1:04:14) and a memorable half marathon debut for Jamie Crowe (Central AC, 1:04:38). Jonathan Cornish (Hercules Wimbledon, 1:05:16) was rewarded with a whopping PB by almost two minutes in third.

The official Bath Half Marathon Facebook page was literally swamped with thousands of posts representing the full spectrum of opinion. Many runners had decided against competing, while some did their own virtual half, supported by a hastily arranged Facebook community.

One group avoided the crowded start area and organised their own run from Keynsham as this participant explained: "It was tough, wet, my time went out the window! No T-shirt, medal or goody bag to show for it but I’m 100% happier I did it this way and met some lovely people too... completely unique experience that’ll probably not happen again so it’s a good memory to have too!"

It seems we will all have to get used to a new normal in these extraordinarily challenging times.