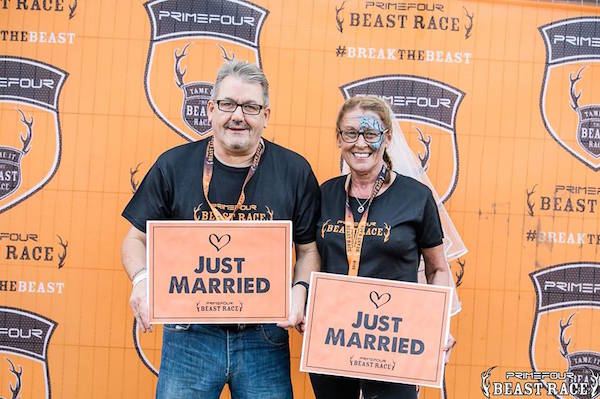 For richer, for poorer … for wetter, for muddier

Taking on an epic challenge like an obstacle race can be life-changing for many people, but none more so than Les Simpson and Marlene Harper.

The couple from Wick tied the knot on the finish line of the Prime Four Beast Race at Loch Ness last Saturday (1 September).

Although 80 of the couple’s friends and family were at the event, the nuptials were as much of a surprise for them as they were to the 1500 other competitors who took part in the gruelling race.

Marlene told the BBC: "Neither me or Les have ever taken part in anything like this before, but we wanted to do something to show how far we've come. It was amazing to get married in front of all our friends, and it was a great surprise for them."

Les added: "After all the mud and sweat came the tears, because Marlene was still my beautiful bride. It's a day we shall never forget."

The pair finished the 30-obstacle 10k race in just over three hours, and were escorted by a piper through an honour guard of race finishers, replete in their wedding finery of medals and race T-shirts.

Social media was full of congratulations for the happy (if muddy) couple, with many runners and friends promising to be back at the event next year to celebrate their first anniversary.