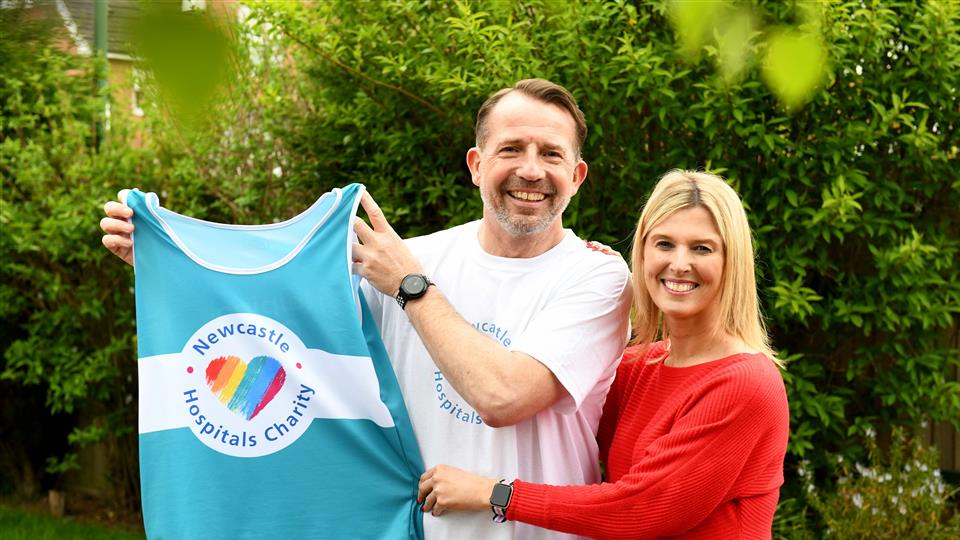 Great North Run addict, Steve Irish, will be toeing the line at this year’s event for a remarkable 23rd time…

Steve Irish, aged 52, from Burnopfield, County Durham, is a veteran of the Great North Run having taken part 22 times.

He uses the run to raise money for causes close to his heart and this year he is supporting Newcastle Hospitals Charity to say thank you for the care his partner, Becky Sylvester, received following a stomach cancer diagnosis 12 years ago.

At the time, aged just 29 and with two very young children, the diagnosis came as a huge shock to Becky and she describes that period of her life as, “the hardest thing I have ever been through.”

Thankfully, the treatment she received, including the removal of three quarters of her stomach, was successful and she is now living with Steve and her two sons Ollie, 16, and Max, 13, and Billy the dog. Steve said: “It’s thanks to the expert care she received at Newcastle Hospitals that Becky is around today.

“It’s incredible she came through it. She’s raising two boys, has her own business. I’m really proud of her and I want to do something to say thanks to the hospital team who saved her life.

“This is a cause that’s close to home for us all. It’s a very powerful motivation, to raise money for Newcastle Hospitals Charity to help others going through the same thing Becky did.”

Steve, who works as a senior manager at Ubisoft in Newcastle, has previously run the Great North Run to raise money for the Great North Children’s Hospital Foundation, also part of Newcastle Hospitals Charity, to thank them for the treatment his son Marc, now 20, received as a child.

Steve, a qualified British Athletics Coach, holds running club sessions twice a week to support less experienced runners. He adds: “I wanted to start a club to help support people who weren’t necessarily the fastest at running but who wanted to keep at it.

“We all have a good laugh together and it helps us all out the front door, which is always the toughest part of running. I’m really looking forward to more of that camaraderie at the Great North Run. No doubt, it will be emotional with people finally back together again.”

After the event’s cancellation in 2020, this year’s Great North Run promises to be extra special and will include belated 40th anniversary celebrations.