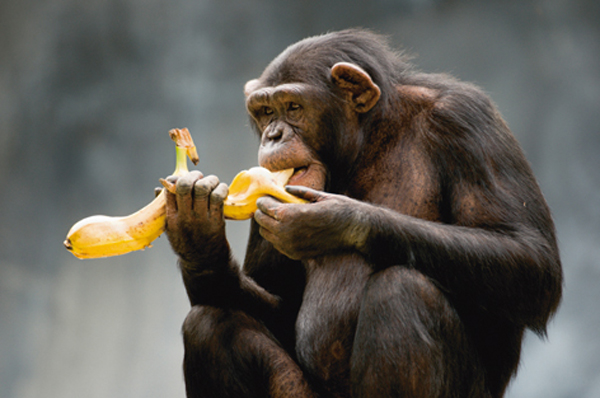 Getting the chimp off your back

Defeating negativity requires a positive mental approach to running. Jenny Chambers, an admired and fondly remembered contributor, tells us how to put the chattering chimp in his place and suggests other helpful techniques in this article first published in 2015

We all have our different reasons for running, whether it’s to lose weight, to prepare for races or to enjoy time with friends, but we all have days when it’s hard to get out. Think of all the excuses we come up with: it’s too cold/windy/rainy today; there isn’t enough time in our busy schedule; and so on.

And then there is that little voice in your head when you do start a run which says ‘it’s too much like hard work to do intervals/run tempo today, let’s just go steady instead’ or ‘it’s a long way home, let’s just cut it short here’. Psychologists call this negative chatter, and it reaches us all, no matter what our standard.

I set off for a run just the other day, but when I began moving I felt dreadful. Drizzle was getting into my eyes, my legs felt as if they were made of concrete, and the chimp on my shoulder was busy with his negative chatter. Are you familiar with chimps?

Dr Steve Peters, who is the psychologist to British Cycling and has helped many sports people to perform at their best by facing their demons, wrote a book called ‘The Chimp Paradox’. He describes our emotions as our chimp, which we must keep in his place by making logical and rational decisions rather than giving into the negative comments proffered by the chimp.

Mine was certainly on good form that day, telling me to go home, then to cut the run short, then to stop and walk ... and this was in the first 10 minutes!

I decided then that this run was going to be good practice in chimp management, rather than adding value to my training diary. I visualised feeding my chimp with a banana to keep him quiet every time I felt a negative thought, and then putting him in a cupboard so I didn’t have to see him in my mind. By the time I got onto the path around the reservoir I was beginning to feel better and although running slowly because I was still fatigued, I knew there was a good reason why I was tired (my hard interval session the previous day), and I was able to disassociate from my sore legs by listening to the birdsong.

It was really pleasing to complete that run and to feel that I had conquered my chimp. Mind games like these can really help us to stay motivated, to sustain our planned programme or to reach our particular targets, but it does need practise to keep the chimp in his place. There are a variety of techniques we can use when things are not going to plan, depending on the particular difficulties facing us.

Target Identification
For those of us who find it easy to make excuses to get out running in the first place, how about
(a) identifying a measurable target, such as entering a particular race, or losing a certain amount of weight. If you have a clear target it makes things much simpler as you know that all those runs will mount up, like putting pennies in a piggy bank, and you will soon get there. So set a goal.

A Running Log
Not only will you see your mileage creeping up but you won’t want to look at empty spaces in the log! I also print a map of the offroad runs I do and keep them in a folder - nice to look through if motivation is lacking. It’s easy to remember the lovely countryside or those muddy fields you ran through when you slipped and ended up laughing at the sheep. So use your running log - digital or analogue.

Buddy Up
Find someone to run with. It is so much easier when you have made an arrangement to meet a friend, as you won’t want to let them down by not turning up. And of course it so much more fun when you share the miles, chatting about all sorts of things and putting the world to rights. There are plenty of running groups to join if you don’t have a particular friend who runs, and they will give you lots of support. So find a buddy.

Rewards
You can bribe yourself with a treat! Perhaps a large slice of your favourite cake after a long run or (for bigger targets) a jacket or new tights might do the trick. If you find it difficult to get started, promise yourself that if you run three times a week for a month (or personal equivalent) you can buy that item.

Duping Yourself
Your running log says - steady run 7 miles. Your negative inner voice says - EastEnders! Time for a little self-deception. Modify your plan to just 2 or 3 miles. That might be all you do, still better than zero miles; and there’s a good chance once you’re on the road you might push it to 4 or 5.

For those of us who make it outside but then have our resolved tested, there are different techniques to use.

Chimp Management
Chimp management means monitoring your mind. You have to get used to identifying the negative chatter in your head and find ways of dealing with it. I use the banana game, as suggested by Steve Peters in his book, when I visualise feeding fruit to the animal when he is being annoying. There are other visualisations you can develop, you just need to pick something that is meaningful to you.

Distraction Methods
These can include listening to music, or counting games. I sometimes count people who pass me on a long run and divide them into categories such as walkers, bikers, other runners and those with dogs. Paula Radcliffe famously uses counting up to 100 when she is racing and things start to get tough.

Break It Up
It is much easier to cope when things are beginning to get difficult by dividing a run into small sections. Say to yourself - ‘I can make it as far as that groups of trees’ and then pick a new target of a road junction or a particular landmark. By breaking a big thing into a series of smaller objectives it becomes much more achievable.

Plenty of things to work on then! Remember, we never regret the runs we do, only the one we don’t. Over time you can develop a box of psychological tools to maintain your motivation and reach the goals you set. Overcoming doubt and adversity makes us mentally stronger similar to how building mileage makes us physically stronger.