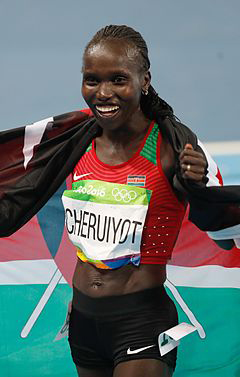 The marathon's capacity to surprise was underlined this morning in London. The women's race was going to script in the first half with Mary Keitany taking the lead and dominating in the early stages. Only Tirunesh Dibaba stayed with Keitany before she was dropped just after eight miles.

Keitany's race now seemed to be against the clock as she matched Paula Racliffe's splits from the 2003 world record run of 2:15:25. However the Kenyan faded in the second half of the race as her pace slowed before she was eventually overtaken by compatriot Vivian Cheruiyot (pictured).

Cheruiyot's measured effort saw her running up the Mall in good style and in splendid isolation to break the tape on 2:18:31. This was a huge PB for the Olympic 5,000m champion. Kenya's Brigid Kosgei (2:20.13) finished second, with Ethiopia's Tadelech Bekele (2:21.30) third.

Mary Keitany battled bravely to complete the race and eventually finished an exhausted fifth in 2:24:27.

The men's race went closer to the script with Eliud Kipchoge always looking the likely winner. The man generally recognised as the greatest marathon runner of all time led an all-star field to half way in 61 minutes, after a barely credible first four miles at 4:30 pace.

Mo Farah made the decision to stay with the leading group and, despite a series of drinks mishaps, found himself in a group of three with Kipchoge and dark horse Tola Shura Kitata at the head of affairs. Kipchoge tightened the screw at 17 miles and Farah dropped off the pace.

The 21-year-old Kitata stuck with Kipchoge for a few more miles before the Kenyan favourite asserted his superiority and pulled ahead to win decisively and score a third London Marathon victory. His time of 2:04:17 reflected a much more conservatively run second half of the race in hot conditions. Kitata finished second in 2:04:49 with Mo Farah the eventual third.

Farah's time of 2:06:21 lowered Steve Jones' 33-year-old British record and his performance in his first marathon since retiring from the track will give him encouragement going forward.