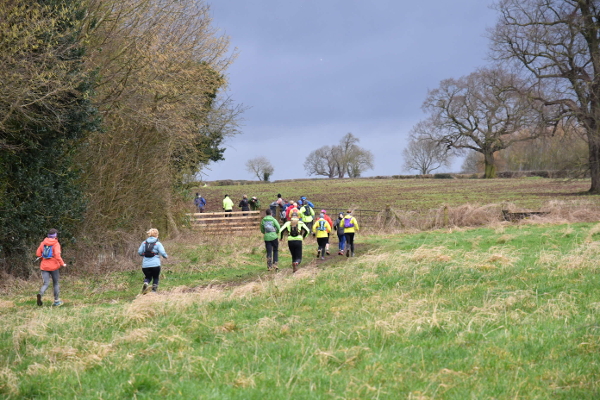 Nothing was going to stop 73 hardy souls from having a go not even Storm Ciara. She tried to spoil Sunday’s (9 February) Winter Bash but the trail runners toughed it out to the end.

The incoming weather system forced the cancellation of many races; however, the Winter Bash went ahead and on a revised route. This was changed from the usual 10 miles to a 10K for safety reasons.

This winter version of the ever-popular Brooksie’s Bash 10 Mile was hosted by Andy Brooks and Chris Hopkinson of Peak Running and was a well organised event from start to finish. They were ably assisted by a team of volunteers who, like Andy and Chris, were determined the race would take place albeit with a few changes.

Runners completed the shortened distance on trails around the South Derbyshire countryside, starting and finishing at Ticknall Village Hall. The route was marked and marshalled so a course map wasn’t required and there were smiles and shouts of encouragement to keep the runners going in the strong winds.

Andy Hawtin of South Derbyshire RR blew in across the line to win in 43:42 followed by Matty Brennan of Erewash Valley RC in 44:43. Hawtin’s teammate Ross Clarke was third in 45:32.

An equally resolute Pascale Holden of Shelton Striders was the winning lady in 51:19. Katie Dennis of South Derbyshire RR was second in 52:39 and Lisa Wright third in 56:13.

Safety was of paramount importance to Andy and his team who had monitored the situation days beforehand. They didn’t give in easily saying: “We put our thinking caps on and used our intimate knowledge of the area to come up with a modified safe route. And following a final, ‘pitch inspection’ declared the Winter Bash ON!”