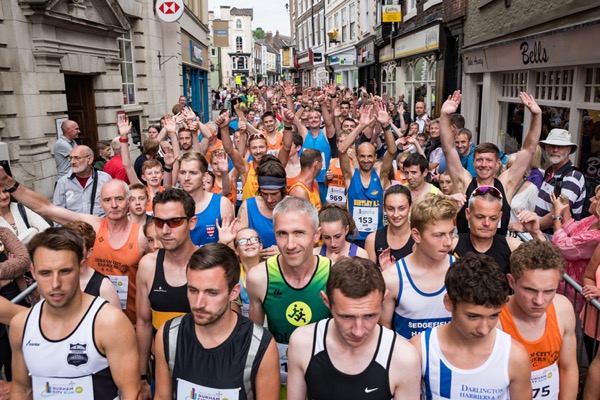 An expanded programme has been announced for this month's Durham City Run Festival, with films, talks, book signings and celebrity appearances. Organised by Events of the North in partnership with Durham County Council, the Durham City Run Festival will take over the centre of Durham and the Gala Theatre for three days (which takes place from 25 – 27 July)..

The popular Prince Bishops Durham City 10K and 5K races, scheduled for Thursday 25 July, are filling up fast and it has been confirmed that athletics legend Paula Radcliffe will take part in the 5k with her daughter Isla, offering an opportunity for local runners to race alongside a global superstar.

The following day will see the all new Run Like a Legend Mile challenge, when waves of runners will have the chance to test themselves over the iconic mile distance on a fast and flat route along the riverside. Runners can book a starting time in advance online, or turn up on the day and wait for an available slot (first come, first served).

The mile theme will continue on the evening of 26 July with a special celebration of Sir Roger Bannister in the Gala Theatre, supported by Durham University. Sir Roger, who passed away in 2018, was the first man to run a mile in under four minutes – a feat that the British public voted as the greatest sporting achievement of the 20th century. Members of Sir Roger’s family will participate in an event that will include a screening of the acclaimed documentary ‘Everest on the Track’.

Places are also filling up fast for the debut of Paula’s Families on Track on Saturday 27 July, a new family athletics initiative that is the brainchild of marathon world record holder Paula Radcliffe. The event will be an opportunity for the whole family to enjoy a safe and fun event together as groups of three, four or five (minimum age of four) team up to cover a distance of 10k in a continuous relay over laps of 250m, 500m and 1k, all on a safe, enclosed course.

Fans of long-distance running are expected to pack the Gala Theatre on the afternoon of Saturday 27 July for the finale of the speaker programme, for a masterclass on how to run a marathon, delivered jointly by Paula Radcliffe and Ben Smith.

To see the full programme for the Durham City Run Festival visit the event website here.