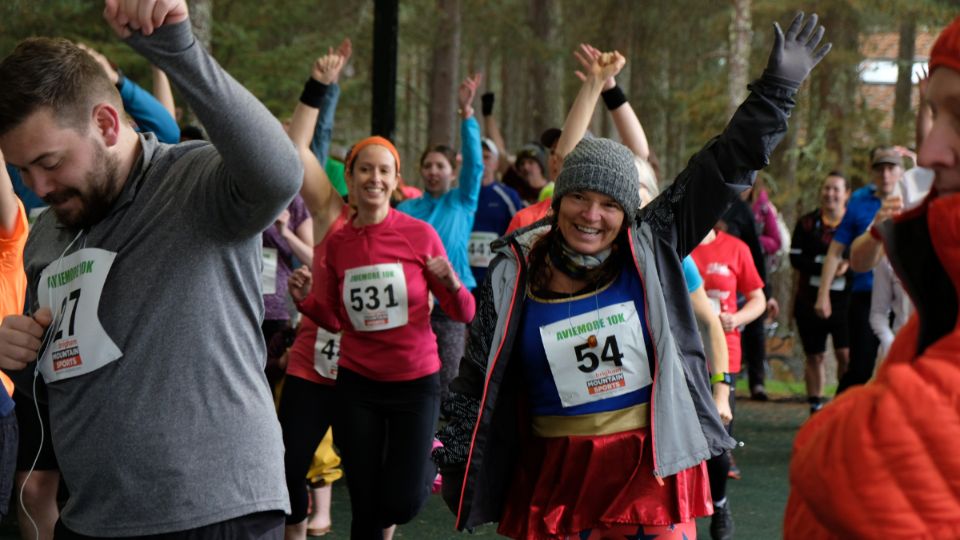 This weekend saw the long-awaited return of the Aviemore Half Marathon & 10K For All – and the reveal of the event’s much anticipated new routes starting and finishing at Badaguish.

Over 900 runners took part in the weekend’s races, organised by the charity to raise funds for the Speyside Trust.

Saturday saw competitors line up in the sun to take on the new half marathon route, which took them on a stunning tour of Loch Morlich and Glenmore Forest Park, all overlooked by the snow-capped peaks of the Cairngorms. On Sunday it was the turn of the 10K competitors, including an 85-year-old woman, to take on their off-road challenge.

In previous years the half-marathon route took runners from Badaguish through to Aviemore on a mix of both roads and trails. But this year, in order to avoid putting any more pressure on an area which has seen more visitors than ever before, organisers worked hard with the local community to create a new route which avoided both Aviemore and Glenmore.

Even with tougher terrain underfoot, runners praised both the scenic new routes. One called the event ‘incredible’, with ‘beautiful views’ in an all-round ‘fantastic weekend’; another called their run ‘a future classic’.

But if the spectacular views weren’t enough to keep runners going, there was plenty to look forward to at the Badaguish finish line, with Speysound Radio on site to keep everyone motivated, a bustling event village and welcome food and drink provided by the team from Speyside Kitchen, the local catering company which runs the cafe at Badaguish.

It was clear from the mood at both the start and the finish that everyone involved with the event was delighted to be back after nearly two years of disruption from the pandemic – as much for the running as for the friendly and welcoming atmosphere the event is known for.

With new routes all round, the winners set tough new marks for future competitors to beat. The half marathon was won by Stuart Gardiner (Inverness Harriers), who stormed ahead in a time of 1.16.17. First female across the line was Rebecca Morris (1.29.13). The 10K was won by a junior, Caiden Thom, in just 36.39, with Anne McSherry taking first place in the women’s category with (40.55).

This weekend’s Aviemore Half Marathon and 10K for All was the first event held as part of Badaguish’s new vision of total inclusivity. Building on its history as an outdoor centre for disabled people, the centre’s new management team is working towards building an accessible hub in Glenmore – a destination for both tourists and the local community. Moving beyond being a respite centre, with its new accommodation services Badaguish is aiming to offer access to the outdoors to everyone, no matter their background or abilities.

Results for the Aviemore Half Marathon & 10K for All are available via runABC Scotland's super fast results service.