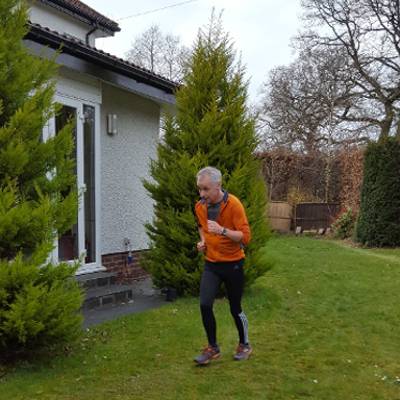 Necessity is the mother of invention as demonstrated by Andrew Freeman who due to the cancellation of the Monsal Trail Half Marathon decided to run the distance – around his garden. The lockdown didn’t stop this runner from thinking out of the box.

Monsal Trail Half Marathon & 10K Saturday was one of over 200 races organised by Nice Work that have been postponed or cancelled due to the coronavirus outbreak. But tough times breed tough runners such as Andrew Freeman who showed that even though he and his family are self-isolating. Andrew came up with a Plan B that involved running a half marathon in his back garden.

Nice Work’s half marathon is held on a flattish, multi-terrain course that was a former railway line, starting and finishing at Bakewell Station. It takes runners through four railway tunnels and across the Monsal Viaduct with stunning Peak District views.

Andrew’s garden half marathon was a tricky route involving numerous tight turns that took their toll on his hips and ankles. He ran lap after lap and was kept well-fuelled and hydrated thanks to the excellent aid station manned by willing volunteers (his wife and children) who cheered him all the way to the finish.

He completed 300 laps in a time of 2:47 and adhered to social distancing rules at all times.

This was as much a mental challenge as a physical one and in Andrew’s words: “The toughest run I have ever done but it was a laugh and I received plenty of encouragement from family over our Whats App Group too.”

Andrew is now looking forward to running a half marathon outside of his garden!