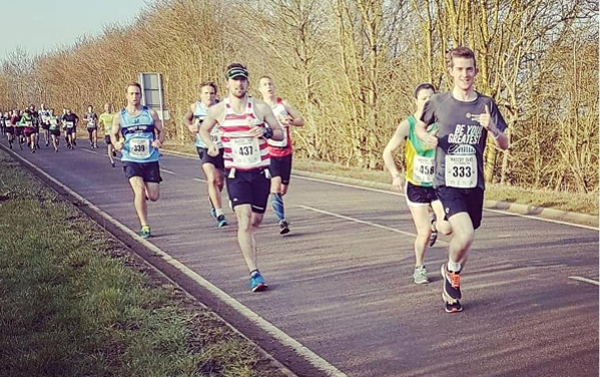 Over 400 runners faced an uphill struggle at the sold-out Naseby 1645 Run (Sunday 24 February) where the notorious Dick’s Hill was lying in wait for them at mile 10...

Following its successful launch in 2018, the Naseby 1645 Run returned for a second year and further boosted its reputation as a tough event. Held on closed/coned off roads on the border between Leicestershire and Northamptonshire it included more than a few hills although the English Civil War monuments and view points were worth sore quads!

Naseby was the final and decisive battle of the First Civil War where Cromwell’s Parliamentarians defeated the Royalists led by Charles I. The 1645 race was of no less importance to those preparing for a spring half marathon or marathon such as London and the organisers Race Harborough intended it as such.

The race started at 9am on a warm, sunny morning in Naseby, Northamptonshire as runners set off along a historic route that was 16.45 miles in total. They passed the Obelisk Monument, Rupert’s Viewpoint and Fairfax’s Viewpoint amongst several others and the arduous Dick’s Hill before finishing back at Naseby Village Hall.

Ludovic Renou of Leicester Coritanian AC was the victor in 1:35:04 followed by Kevin Powell of Leicester Triathlon Club in 1:36:21. Tom Millard of South Kent Harriers was third in 1:37:02.

Alice Thackray of Charnwood AC was the fastest female in 1:54:30. Paula Downing of Mablethorpe RC was second in 1:58:04 and Natasha Brown of Kettering Town Harriers third in 2:03:30.

There were 444 finishers who received a Naseby 1645 medal and an orange long-sleeved T-shirt.