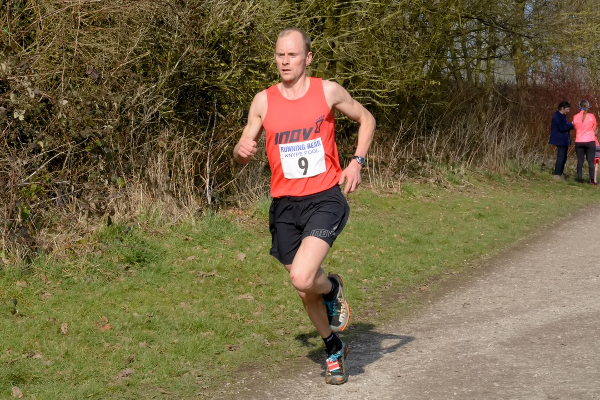 Simon Bailey on a winning streak at Knype Pool 5

There were wins for Bailey senior and junior at Sunday’s (24 February) Knype Pool 5. It was Simon Bailey's fourth win and Oliver's first at this charity race in Staffordshire.

The Knype Pool 5 race obviously agrees with the Mercia Fell Runner who has made four appearances to date. There was a winning debut and a new course record of 26:55 in 2013 – beating the existing record of 27:02 set by Mark Dalkins the previous year. This was followed by victories in 2017 and 2018 and now, in 2019.

This year Bailey was first across the line in 28:15, shaving 10 seconds off last year’s time. Jason Burgess of Buxton & District AC was second in 29:32 followed by his teammate Ben Light in 29:43.

Leah Whiston of Newcastle (Staffs) AC was the fastest female in 33:11; an outstanding performance by a former junior cross country champion who is getting back to her best as a senior runner. Amy Clark of Buxton & District AC was second in 34:04 with Natalie Duncombe of Knutsford Tri Club third in 34:38.

Oliver Bailey is following in his father’s footsteps as the Mercia Fell Runners youngster won the 1 Mile Fun Run in 6:38. Clarissa Rigby of Boalloy was the first girl home in 6:40.

Organised by Biddulph RC, the Knype Pool 5 was held on a challenging off-road course consisting of fields, trails and woodland paths and included the tranquil Knypersley Reservoir (pool). All profits from this race were donated to the Biddulph mayor’s charities.