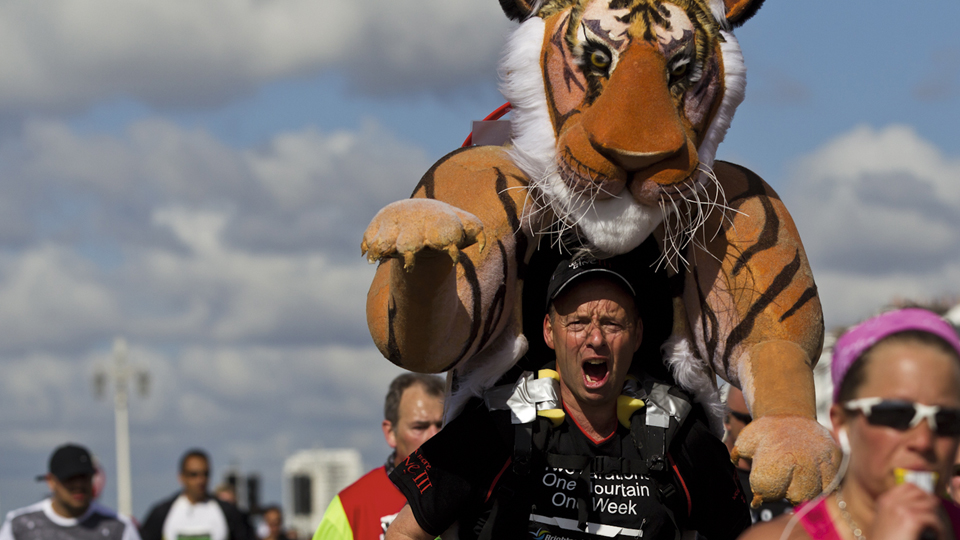 We caught up with two superheroes and a very friendly tiger to find out what drives runners like them to swap their trusty vests and shorts for capes and costumes...

Odds are that at least some of the runners in the last race you went to sashayed, galloped or shuffled their way round the course in fancy dress. Part of the reason for this explosion in sprinting Buzz Lightyears and 26.2-hungry Elvises is simply down to how popular and accessible running has become.

It stands to reason that the more runners you have in any given event, the more Mr Blobbies and Cinderellas you’ll have too. Running is already fun, so why not make it even more fun by doing it in a silly costume?

But the very popularity of our sport has also had unintended consequences for the significant part of the field running to raise money for charity. With even casual runners taking in more races than ever before, many charity runners feel they need to show donors that the challenge they’re being asked to support really is challenging. And that’s where fancy dress comes in.

Nik Robinson ran a 10K and a Half Marathon as a Teletubby to raise money for Macmillan; he’s completed another Half Marathon as Superman (for Mary’s Meals and Mercy Corps) and a further 10K as Austin Powers (for Befriend a Child).

Nik says :“Since I’d already completed a few 10Ks and halfs, I decided to run in costume to make potential sponsors feel I was making a special effort. Running in fancy dress also gets people’s attention on race day and raises the profile of my charities.”

Getting the costume right is an important part of the fancy-dress challenge, especially if you’re one of the many hundreds of runners who set out to break records for running marathons in chain mail, wedding dresses and phone boxes each year. Most charity runners, however, simply go with what they have to hand or feel will be manageable come race day. But a select few go that bit further, and design an outfit that will make their effort as hard, or as meaningful, as possible.

Paul Goldstein, a wildlife guide and photographer, has run 19 marathons dressed in a suit inspired by the wild tigers of his own charity foundation in India. Since he began his ‘Worth More Alive’ campaign, Paul has raised over £250K to help save tigers. Based around a rucksack and made from foam, resin, fake fur and glue, Paul’s suit weighs 12kg (26lbs), and wearing it adds around two hours to his ‘normal’ marathon time.

“However I carry her, it’s never that comfortable, especially around my hips and neck,” he told runABC. “But in terms of pain, I always remember what tigers are going through.” That sense of being part of something bigger than themselves also gives a lot of charity runners the courage to carry on when the costume gets hot and the going gets tough.

But it’s not just the heat. Add in the chafing, rubbing, dehydration and difficulties in training properly – rather than run in his suit Paul integrated a weekly run with a rucksack with an equivalent weight into an otherwise normal marathon plan – and you get a real picture of just how hard the fancy-dress challenge can be. It also gives you an idea of just how great the sense of accomplishment – on both a personal and fundraising level – can be too.

So why not give fancy dress running a go? If the experiences of the runners we spoke to are anything to go by, the disadvantages of running in fancy dress are more than made up for by the delight and support of the crowds. Plus, there’s nothing quite like overtaking someone when you’re dressed like a banana …