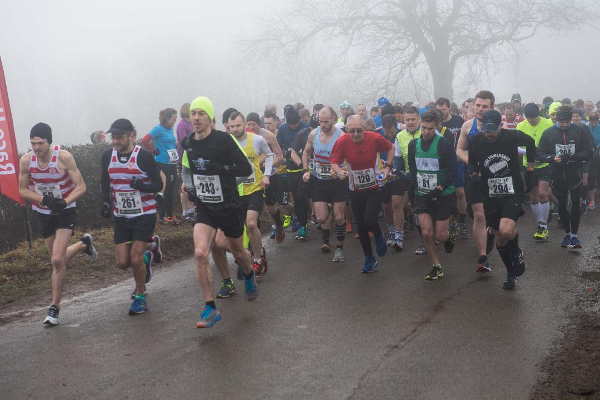 Battle commenced at 9am yesterday (Sunday (18 February) - a foggy morning in Northamptonshire at the start of the inaugural Naseby 1645 Run. It was a hard fought contest with only one winner.

There were no cavalier attitudes instead a steadfast approach was shown by everyone involved in this newest event from Race Harborough with nearly 300 runners facing a tough test in the form of a hilly 16.45 miles on roads around Naseby that included ‘Dicks Hill’ at mile 10. They encountered several monuments and memorials along the way that are permanent reminders of the Battle of Naseby, a decisive event in English Civil War history. These included the Cromwell monument and two sites used as viewpoints by commanders Prince Rupert and Sir Thomas Fairfax.

Ludovic Renou of Leicester Coritanian AC took the crown at the Naseby 1645, crossing the line in 1:36:54. Jack Chennell of Kettering Town Harriers was second in 1:38:36 with Matt Driver of Harborough AC third in 1:42:21.

There were prizes for the first, second and third men and women plus trophies for age category winners. All finishers were guaranteed a PB at this debut race along with a T-shirt and a medal as well as being part of a unique event with a historical background. It was sponsored by the Training Shed Market Harborough who also provided free, post-race massages.

A big ‘thumbs up’ for the course along with positive feedback means that the event will return next year. This gives clubs plenty of time to rally their forces.