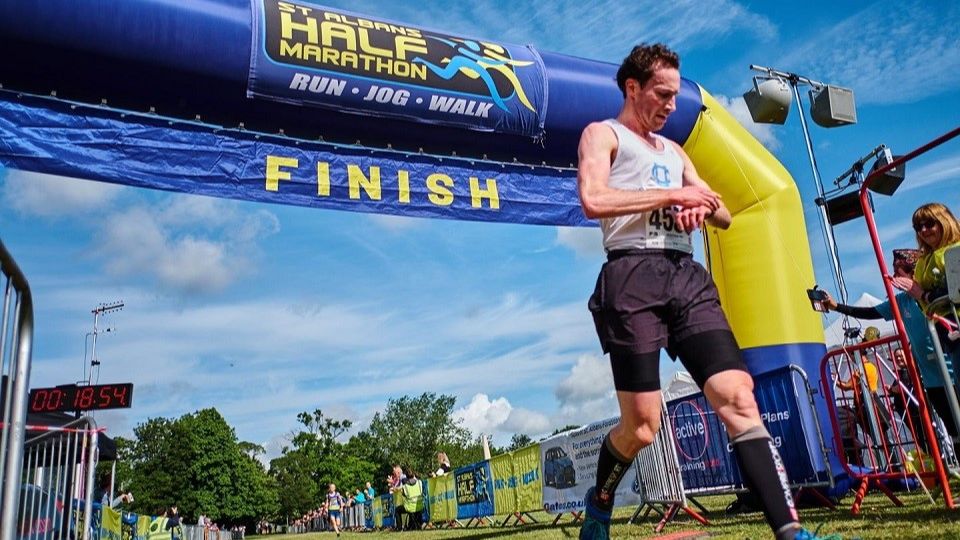 Runners appreciated the water mist they could run through outside the Holly Bush pub at Harpenden during the St Albans Half Marathon on Sunday (13 June). As the mercury nudged 27C the refreshing shower helped them to reach the finish line in historic Verulamium Park.

After a fallow year due to Covid 19, there were a number of changes to the usual format for the 39th year's event plan, one of which was the lack of a finisher's T-shirt. Instead, St Albans Half Marathon Race Director Martin Day had aligned the event with a project to plant a tree in a sustainable forest in the UK for every £100 received in entry fees.

There was a hot pace set in the main event by Aran Davidson (Chiltern Harriers, 1:12:28) to take the top step on the rostrum from Tim Campion-Smith (Oxford City, 1:14:45 PB) and Jonney Yeates (Barnet, 1:15:38 PB) – who spends most of his time in Australia but won the Hertfordshire 10K at Knebworth the previous weekend.

The half marathon was preceded by a walking version of the event with nearly 200 finishers led at an impressive pace by Richard Bannister (2:40:32) and Phillida Jones (2:46:12).

Just under 250 chose the 5K option where the winners were Ben Felton (Colchester Harriers, 17:04) and Zou Hilton (20:49). This race took place entirely within the 100 acres Verulamium Park, named after the Roman city of Verulamium on which it stands. The ancient city walls and outline of London Gate can still be seen and in 1923 the site was the first of its kind to be listed as a Scheduled Ancient Monument.

The family 1.5-mile fun run will be back for next year's 40th event, along with all the usual hallmarks of this huge community event that had to be scaled back for the Covid-secure arrangements for 2021.

For advance details of the 40th event in 2022 click here