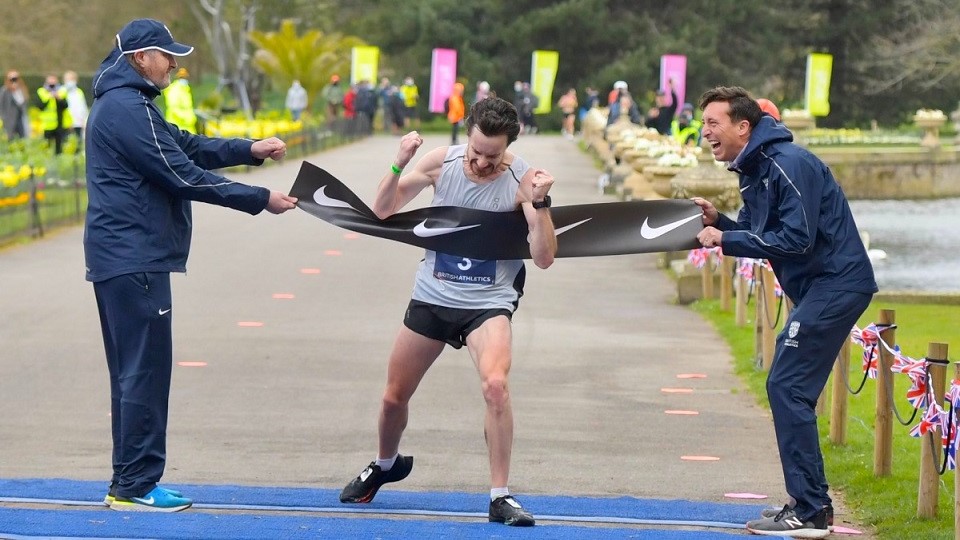 It was pure drama in the Royal Botanic Gardens, Kew early on Friday morning (26 March). In the first-ever closed doors GB&NI Olympic marathon trials there were two winners in Olympic qualifying times; a Welsh record; a British age-group record and 12 personal bests achieved. The athletes certainly rose to the occasion, even if there were no cheering crowds.

The greatest shock came in the men's race, won from behind by 39-year-old new dad Chris Thompson (Aldershot) in a lifetime best 2:10:52. 'Thommo', as he is affectionately known, seems to have been around forever, having beaten a then little-known Mohamed Farah to the European under-23 5000m gold in Poland in 2003.

Many setbacks, injuries, and the birth of his son Theo in the small hours just four days earlier had combined to produce an adrenaline-fuelled burst of speed that took Thommo past the leading trio of Ben Connor (Derby, 2:12:06), Mohamud Aadan (Thames Valley Harriers, 2:12:20 PB) and Dewi Griffiths (Swansea, 2:13:42) in the final two laps of 12 around this surprisingly quick circuit. Ian Leitch (Brighton Phoenix, 2:17:26) broke the UK M45 record.

Connor, who already had the 2:11:30 qualifying time, was happy to book his seat on the plane to Tokyo and the leading pair will be joined by the pre-selected Callum Hawkins, on pacemaking duties here.

In contrast, the women's race went to the front-running favourite who was a relative novice competing in only in her fourth marathon. Steph Davis (Clapham Chasers, 2:27:16) – a 30-year-old London-based Scot – took the race by the scruff of the neck after an hour and a half to go more than two minutes inside the 2:29:30 required for selection.

Natasha Cockram (Micky Morris Team, 2:30:03) smashed her own Welsh record in second place but missed the vital qualifying time by 33 seconds after dropping off the pace in the closing stages. Steph Davis will be joined in Tokyo by Jess Piasecki (Stockport) – currently the fastest ranked Briton with 2:25:28, and Steph Twell (Aldershot) who ran 2:26:40 in October 2019.

In a delightfully effusive post-race interview, Chris Thompson said: "This week has knocked me for six, I've been trying to hold it together, but I've never felt so much emotion in my life. I'm 39 for crying out loud - this doesn't happen."

In a slightly more measured response, Steph Davies said: "I can't believe it, I'm smiling so much, I'm so delighted. I knew I was in good shape, but anything can happen in the marathon and you can't just rely on it being your day."