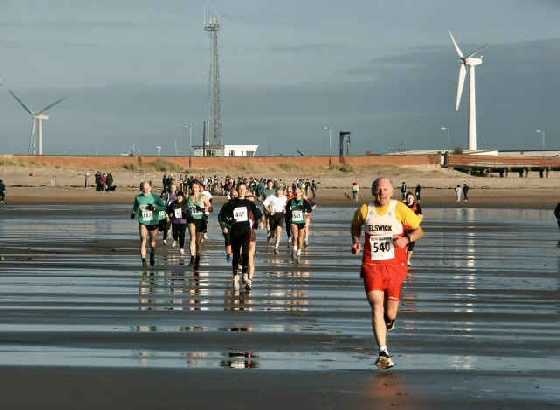 There’s history in the Blyth Sands

For close to six decades, the stretch of beach from Blyth to Seaton Sluice has been home to one of the region’s most historically rich events. This Sunday (2 December) will see the Blyth Sands Race edge closer to its 60th year when 200 participants take on its demanding 5 mile course.

Described as being 'steeped in glorious tradition', the Blyth Sands Race, organised by Blyth Running Club, began life as a duel between Blyth Rowing Club and the local harriers. In December 1959, the rowers challenged the runners to a five mile race – with the former given a serious handicap – and the former claimed a convincing victory.

Ever since then, the race has existed solely for runners yet it has still retained its distinctive 'scratch' system that makes it such a compelling spectator event. The staggered start is calculated by handicaps, which are based on the age and gender of the participant.

Added to this is a variable route, which adds a further layer of excitement. According to the event website, the scenic 5 mile route isn’t possible 'to go around', meaning participants are at the mercy of the tide.

It continues, “At low tide the sand is compacted and firm to run on, although the weather can turn this into ‘ripples’ like corrugated roofing – much worse than the ‘London cobbles.’ Or when the sea has been particularly wild the surface can be dredged exposing rocks and even the concrete, defensive blocks from the war.”

All in all, this Sunday’s Blyth Sands Race looks likely to swell with excitement.