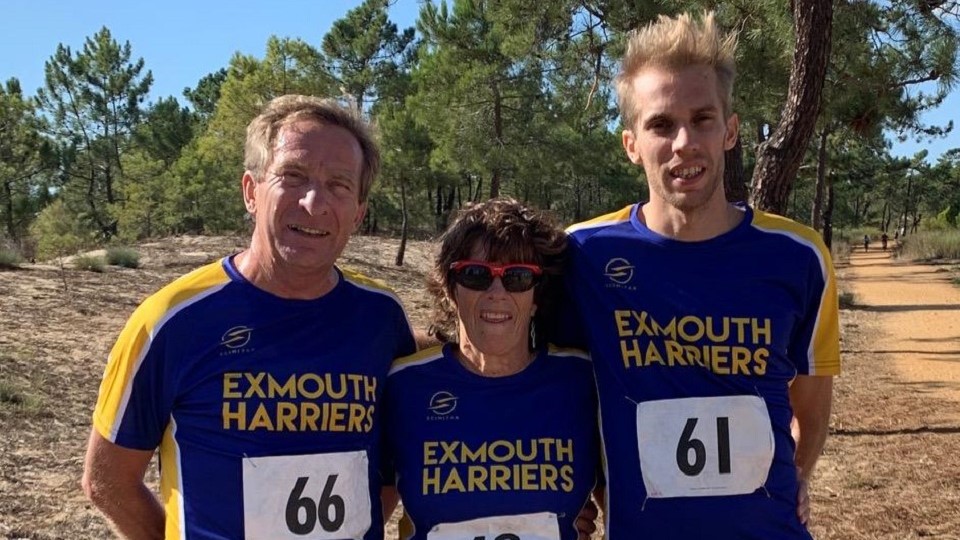 Devon athlete 'beside himself' with joy!

Virtual racing just got real for the White family

Virtual running has been synonymous with lockdown since mid-March. For some of us, it has provided light relief – an occasional dip of the toe into the waters of competitive running – while for others the attraction remains a mystery and nothing but the real thing will suffice. Then there is the White family of Exmouth Harriers...

Full disclosure – this correspondent is in the latter camp regarding virtuals – but that does not prevent runABC writer Alan Newman from admiring the inventiveness of organisers in promoting an ever-increasing number of extraordinary challenges or the dedication of those runners who commit to participating in them.

Des and Alison White are pictured above with their son Oliver at a training and racing camp in Portugal last November, so they are no strangers to regular age-graded competition. However, the arrival of COVID-19 put paid to those travelling and running activities as the health of the nation necessarily became the primary focus.

From 18 March to 4 August 2020, Des and Alison have both completed all 45 of the Exeter-based City Runs Events virtual challenges – the sole 'ever-presents' in the series. Oliver managed 19 races and an average age-grade of 74.9% for bronze in the unofficial 'White family challenge'.

After 45 races between 400m and 15km adding up to 122 miles, including all six stages of an Ekiden Marathon relay (twice) the White family gold deservedly went to Alison (76.7%) by 0.1% ahead of Des (76.6%). That was despite Des completing three fast 400m runs immediately after a 4km time trial in a desperate attempt to snatch the title on the final day. Not that the Whites are at all competitive!

Along the way, all three improved their speed and fitness, while having a bit of fun and some unusual experiences. For example, thanks to the delights of 'double-dipping', Des and Alison are competing in the Winding Paths South West Coast Path Virtual Challenge that started in Minehead on 1 June and ends 636 miles later at Poole.

On 16 August, Des had the unnerving experience of accompanying his virtual self on an actual long run between Exmouth and Budleigh Salterton – feeling 'beside himself with joy' at the very thought! Meanwhile, Alison, who is around 50 miles behind, will chase her virtual shadow on the same route later this week and both will finish two weeks apart next month. Virtual running can get a bit complex.

Making the most of all those miles recorded, Des also entered and finished the Great Virtual Run Across Tennessee in 87 days, exactly one week ahead of his son. Alison sensibly stayed at home so she doesn't have to complete a virtual quarantine period after 'visiting' the USA!