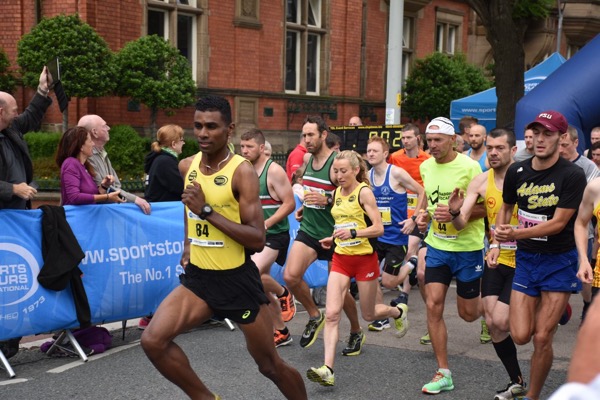 If they weren’t too familiar with each other before, the travails of the Tour of Tameside – at which Mohammed Abu-Rezeq and Gareth Raven posted four consecutive 1-2 finishes – will surely have brought them far closer. Unfortunately for Raven, it was Abu-Rezeq who claimed the title with a quartet of impressive yet hard fought victories, while Kirsty Longley defended her title to make it four in a row for the Liverpool runner.

The Tour kicked off on Thursday (14 June) at the X-Trail 10K, with 534 competitors weaving their way through Daisy Nook and Park Bridge Country Parks on a course that offered some breathtaking views of the local landscape.

This set the tone for the duel between Abu-Rezeq and Raven, the 2017 champion, with the Altrincham runner bagging victory in 34:44, a winning margin of just two seconds. Liverpool Pembroke’s Kirsty Longley took first in the female field in 37:40 ahead of Susie Chesher (40:12).

The following today saw participants move on to Stalybridge for the infamous Hell on the Fell Race. Another strong showing saw 438 runners compete with Abu-Rezeq once again top of the pile in 34:53, followed seven seconds later by Raven. Longley was well on top again, coming first in 41:51, over two minutes ahead of Susie Chesher (43:55).

The final day of the Tour brought the biggest turnout too with 645 participants competing in the classic Dr Ron Hyde 7 Mile. Named after the founding father of the event, Dr. Ron Hill (who was present at Sunday’s event) the race saw Abu-Rezeq (36:10) record his largest winning margin of the competition ahead of Raven (38:11). Longley capped what was another memorable championship win with a fourth successive and comprehensive win in 42:41.

Organisers Sports Tours International paid tribute to all those taking part and praised them by saying: “We hope everyone is recovering well from an amazing four days! You were all unbelievable! Thank you for making this year's Tour of Tameside a great success and we are so proud to have had more women run this year than ever before.”