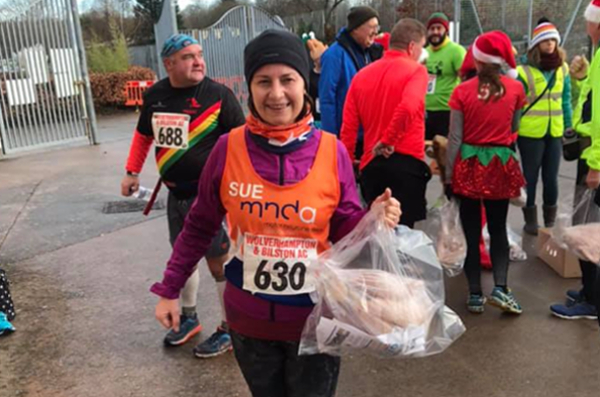 Sue steps out for MNDA at Turkey Trot 5

MNDA (Motor Neurone Disease Association) fundraiser Sue Acaster braved the cold conditions at Sunday’s (16 December) Turkey Trot 5 in Wolverhampton. Sue was aiming to complete her 16th event out of 18 for the charity in 2018.

Sue Acaster became a fundraiser for MNDA after her husband, a supremely fit runner and cyclist was diagnosed with motor neurone disease in July 2016. Sue set a target of raising £3,000 for MNDA and the West Sussex South Branch by completing 18 events this year including London Marathon, Great Birmingham 10K and Royal Parks Half Marathon.

She was amongst 240 runners who were in festive spirits on a frosty morning for the start of the 35th Turkey Trot 5 Miler, organised by Wolverhampton & Bilston AC. This annual pre-Christmas road race is popular with club runners and the unaffiliated as an end of year test of fitness levels before the seasonal holiday. They faced a hilly course around the city which started and finished on the athletics track at Aldersley Leisure Village.

Jonathan Morris of Wolverhampton & Bilston AC was first across the line in 26:54 closely followed by teammate Jack Pickett in 27:09. Martin Williams of Tipton Harriers was third in 27:44.

There was another win for the host club as Hannah Pearson became the fastest female in 32:23. Sheridan McWilliam of BRAT was second in 33:04 with Kelly Butler third in 33:16.

Sue Acaster finished in 58:17. She and the other runners were each presented with a frozen turkey courtesy of race sponsor Avara Foods.