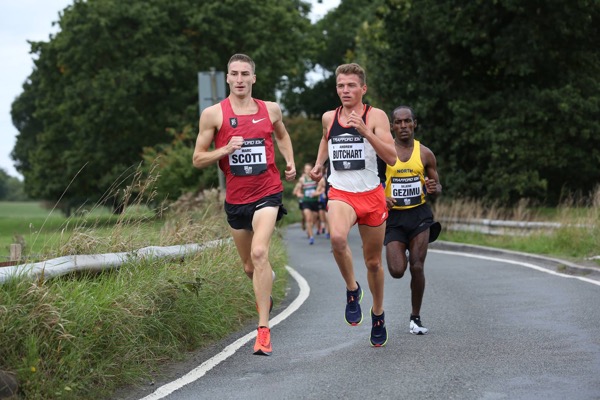 There were, as anticipated, a barrage of fast times recorded at yesterday (Sunday, 2 September) Trafford 10K as Marc Scott and Jessica Piasecki finishing top of their respective fields, while Andy Burtchart marked his return from a six month injury with second place and a sub 30 minute performance.

Organisers Altrincham and District AC were forced to postpone the race from its original date in in March due to the inclement weather. The re-scheduling seemed to bring with it even more excitement, however, with a host of top runners signing up for Sunday’s race.

Following on from his course record performance at the Mid-Cheshire 5K, Marc Scott put in a PB showing to take victory in 28:57. Butchart, who was forced out of the Commonwealth Games in Australia, signalled his return to action with second place in 29:28. Liverpool Harriers’ Dejene Gezimu took third in 29:35.

The women’s competition went with form too as Jessica Piasecki carried on from her victory at the Podium 5K with another impressive win. Piasecki crossed the line in 32:52 the fourth fastest time in the UK this year – and over a minute quicker than second place Eleanor Davis (33:56), with Danielle Nimmock in third position.