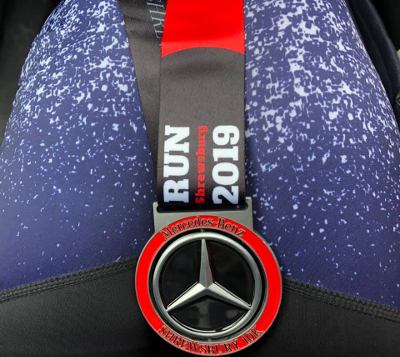 The Mercedes-Benz of Shrewsbury 10K (Sunday 17 March) stayed on track despite the best efforts of the Great British weather. Plan B proved to be a success.

There were pre-race headaches for race organisers as strong winds and heavy rain caused the River Severn to rise and flood nearby paths in Quarry Park on the race route. Following discussions with the Environment Agency and Shropshire Council, the organisers put their contingency plan into action; this involved diverting runners away from the affected section and along the Town Walls instead. They posted regular updates about the re-route and changes to car parking on social media, all of which was appreciated by the runners.

At 9am, over 2,000 runners set off from the High Street to follow an undulating route through the historic town that included a couple of river crossings. Marshals and spectators cheered them every step of the way and the Scouts manning the water station kept them well hydrated.

Only five seconds separated Richard Carpenter of Tipton Harriers from his teammate Jonathan Carter with Carpenter winning in 32:33 followed by Carter in 32:38. Patrick Townsend was third in 32:55.

Sara Willhoit of Shrewsbury AC improved upon her third place last year to win the women’s race in 37:32. Rachel Coupe of Telford AC was second in 41:26 with Dominique Searle of Northwich RC third in 41:37.

Also taking part was Desmond Lee, the oldest competitor at 81 years old who finished in 1:12:09 and visually-impaired runner Jay Cruz Semple who ran in memeory of his uncle and to claim the premium Mercedes-Benz themed medal.

At the finish line, pupils from The Priory School handed out goody bags to the finishers containing the coveted medal, technical T-shirt and flapjack courtesy of Evolution Foods.