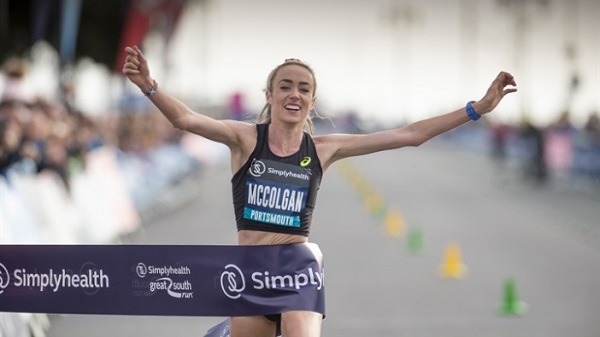 McColgan is a record breaker at Great South Run

Eilish McColgan broke her mum's Scottish 10-mile record to win her second successive Great South Run title in Portsmouth yesterday (20 October) in the 30th celebration of this autumn classic on the Hampshire coast. However, there was to be no historic fourth men's race victory for defending champion Chris Thompson, as Marc Scott led the capacity 20,000 field home.

This was the fourth women's title for a McColgan after Liz's wins in 1995 and 1997, when she set the Scottish record (52:00). Eilish secured her first Great South win last year in 54:43 and was widely believed to be targeting the family PB if conditions were favourable. Sunshine, a few clouds, 11C and a light breeze was just what McColgan ordered as she strode imperiously to 51:38 – the second fastest UK time ever behind Paula Radcliffe's 51:11, which was also set on this course in 2008.

“I feel like I can’t stop smiling!” said McColgan. “My mum said I was in shape to run 51:30, so I wasn’t too far off of her expectation for the day. I’m over the moon with that. I run better off of a strong pace, I probably went a little bit too hard!”

Not surprisingly this was a solo effort for the Dundee Hawkhill Harrier and would have placed her just outside the top-20 men had the elite women's race not been run separately. In fact, the performance is all the more impressive as the women did not have the company of top male club athletes. There was a good battle for second nearly four minutes behind the flying Scot as Verity Ockenden (Swansea Harriers, 55:15) edged ahead of Jenny Nesbitt (Cardiff, 55:18) with both making their 10-mile debuts.

The men's race was another top quality race and much closer than the women's result, with the top four under 48 minutes. Only one man went below 47 minutes though. Marc Scott (Cambridge & Coleridge, 46:57) on his longest race to date led Ben Connor (Derby & County, 47:16), Emile Cairess (Leeds City, 47:32) and Jake Smith (Cardiff, 47:41) across the line.

“I came to get the win and that’s what I did today so I’m pleased with that,” said Scott. “The conditions were good, perfect for road running and there was a good domestic field assembled which was great to see”.

Simplyhealth Great South Run continues to rewrite the record books as Cairess set a British under-23 mark. The top 19 men were under 50-minutes, including defending champion Chris Thompson (49:22) and a dozen women broke 60-minutes.

The previous day 600 had lined up for the Simplyhealth Great South 5K won by Paul Navesey (Crawley, 14:56) and German athlete Sonja Vernikov (17:36).

Early bird entries are available now for next year's event on 18 October.