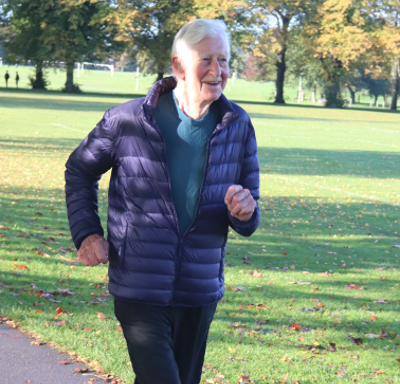 Age was just a number to 92-year-old Roger Sawtell who took part in his first ever parkrun at Northampton last Saturday (19 October). He stepped forward with other super seniors at this inspirational event.

This was the first parkrun takeover for the Step Forward with Lewis running group, open to people of all ages looking to get fit whilst having fun in the company of others. They organise running, walking and wheelchair activities three times a week that build strength and stamina for sporting performance and improve physical and mental wellbeing.

The going was good to perfect at Northampton Racecourse as 479 people ran, jogged, wheeled and walked on a beautiful autumn morning in the East Midlands. Joining them was Roger Sawtell who had lived through key moments in time including WWII, Rock and Roll, the moon landings, the first female Prime Minister and the advent of a new Millennium. He made his own contribution in the form of his debut at Northampton parkrun at the tender age of 92!

Roger finished in 46:26 and became the oldest Northampton parkrunner: a title held by 86-year-old Bob Emmerson who has completed 377 parkruns to date along with 96 marathons and 96 ultras. He congratulated Roger, saying he was “proud of this guy”. Bob Emmerson of Leamington C & AC crossed the line in 43:18.

Angela Copson of Rugby & Northampton AC finished in 22:59 making it an unforgettable day for the more mature members of the parkrun community.

You are never too old for parkrun...