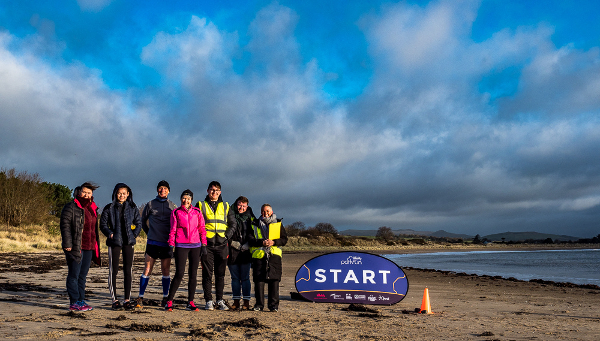 Runners might have been forgiven for not bringing a bucket and spade to the new Hafan Pwllheli parkrun. This very friendly event was run entirely on sand along the Welsh coastline.

A modest 25 people attended the first Hafan Pwllheli parkrun on 16 February, enjoying an out and back route along the beach but there was a big increase in numbers to 55 for Week 2 (Saturday, 23 February) that may have been partly attributed to the morning sunshine, making for stunning views across the bay.

The new parkrun is held at Plas Heli Cyf, Pwllheli on the southern coast of the Llyn Peninsula in North West Wales and home to the Welsh National Sailing Academy. Pwllheli is known for its beaches and this unusual parkrun course sees soft sand for the first section, changing to compact sand at the turnaround point. The run action is accompanied by the lapping of waves.

At the inaugural event, Twm Morgan of Rhedwyr Hebog Running and Jo Perry of Trawden AC were the first man and woman in 22:06 and 26:12 respectively.

Last weekend, Graham Atkinson of Lonsdale Fell Runners was the first male in 23:06; Georgina Walker of Lymm Runners was the first female in 27:48. Returning for a second time was the Bastock family with daughter Megan (JW10) the quickest out of the three, finishing in 45:52. Her brother Huw and mother Louise followed.

Small can be beautiful as the Hafan Pwllheli parkrun shows and it is a ‘must do’ for any parkrun tourist.