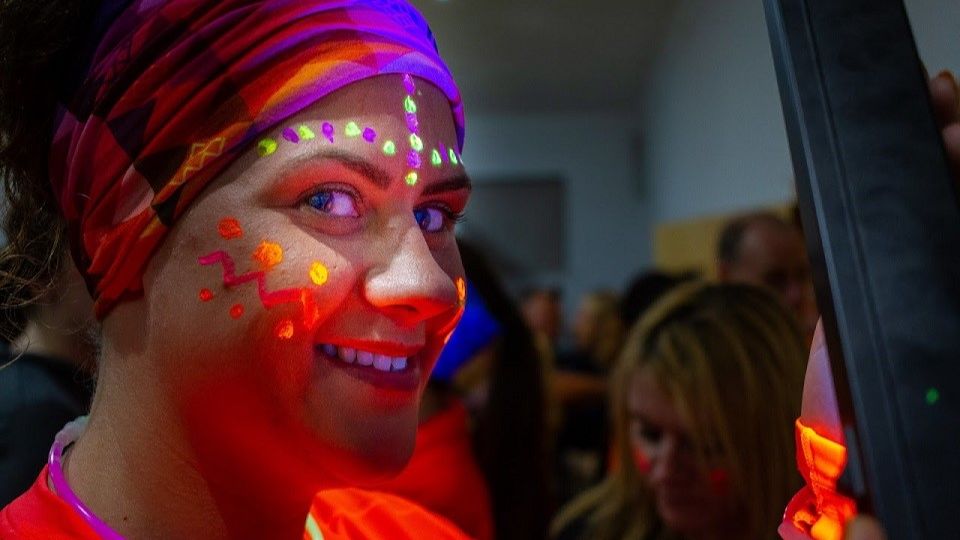 Strike a light! 350 pip Storm Arwen at the post

The competitor pictured above certainly made the most of the free luminous face paint on offer to all competitors in the sold-out Severn Bridge 5 Night Race on Friday (26 November).

runABC is always on the lookout for something different and this Rogue Runs promoted event certainly ticked the box for the 352 finishers (in 1:13:41) who ventured forth from the warmth of Race HQ at Chepstow Rugby Club to pip Storm Arwen at the post.

The Severn Bridge was closed to all traffic less than 24 hours after the race and even the filming of I'm a Celebrity...Get Me Out Of Here was cancelled for the weekend due to storm damage to the production facilities – described as "technical difficulties" by ITV!

At 7:30pm on Friday evening, the competitors created a colourful ribbon of humanity on the pedestrian accessway to the 'old' Severn Bridge. The fully tarmac-covered route is well lit and this is one race where getting lost is simply impossible!

Jon Belcher (Lliswerry Runners, 28:52) is an M45 master and more than twice the age of his nearest adversary, Ben Demellweek (Cardiff AAC, 29:26) who is an under-20 junior. Third place was claimed by Harvey White (unattached, 30:38) as just the first two managed sub-6-minutes per mile in the breezy conditions.

Lliswerry Runners won the men's team and Caerleon RC the women's team. And how's this for an interesting stat: there were only eight complete men's teams but 22 women's teams!

The next Rogue Runs Severn Bridge 5 Night Race on Friday 10 December is already full but if you would like to try something just a bit different there is a Twilight Race planned for Friday 1 April 2022 that might well feature spectacular skies at sunset.

For a modest fee of £12/£14 unaffiliated you will receive free parking; chip timing with large screen TV at the finish; pre-race warm-up; free face paints and Cyalume wrist bands; hot drinks and cake post-race and, of course, the all-important medal to remember the event.