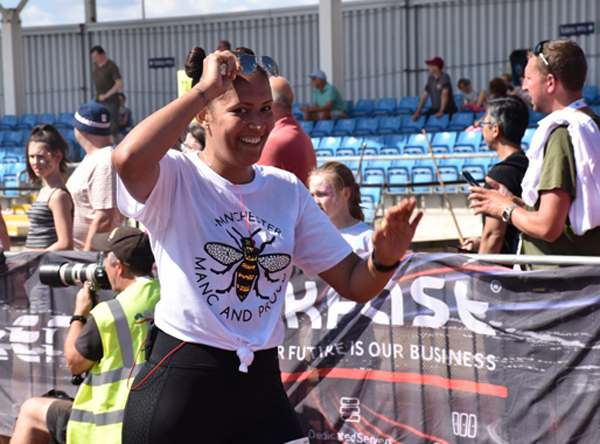 Seven In A Row For Mo

Altrincham & District AC's Mohammed Abu-Rezeq completed an impressive 7-year streak as winner of the UKFast We Love Manchester 10K on Sunday (8 July). His time of 31:27 saw him secure victory by a decisive three minute margin to continue a string of victories that began in 2012.

Liverpool Pembroke Sefton's Kirsty Longley (35:28) regained the title that she had won in 2016 but in a closer contest with Metro Aberdeen's Fiona Brian (35:57). Fiona's husband Tom also featured on the podium, his 34:46 securing third place overall.

It was another hot day at the office with lots of runners reporting slower times than usual as they eased off the gas in the heat and took advantage of the extra drinks stations provided. Ladies champion Longley didn't let the conditions deter her though. Post-race she said: "Had to work hard in the heat over the last 2k but pleased to run a course PB of 90 seconds."

The heat didn't deter veteran Malcolm Parry and wife Jan either as both claimed age category prizes. Malcolm from North Wales told runABC North: "I had hoped that the 9.30 start would mean racing conditions would be cooler but it was hot right from the off. It was a day for a measured approach so I decided not to follow the 60 minute pacer and just run my own race.

"I enjoyed cooling off at the spray station and was happy to cross the finish line two minutes quicker than my Great Manchester 10K time in April. It was a bonus when Jan and I received our prizes from the Mayor and Ron Hill. A nice end to a great day."

Dave Hiley was one of many participants who praised the event's Manchester Bee theme medals: He said on Twitter: "Extremely hot! Nice medal bling and a nice new clean T-shirt to wear."

There were 2,000 plus entries for the event known as 'the people's race' with many of the field supporting good causes like The Christie and We Love MCR Charity.

All the results for the UKFast We Love Manchester 10K are showing on runABC North race listing.