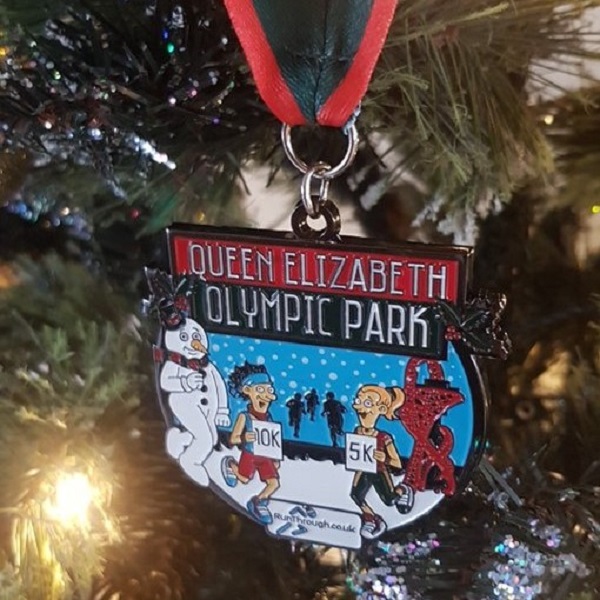 Many competitors declared the RunThrough Queen Elizabeth Olympic Park (QEOP) Christmas medal (pictured above) the best yet and a worthy bauble to add to the Christmas tree! In contrast to last year's snow and ice blighted event, the sun shone and late season personal bests were achieved on the flat, fast and inspirational course through London 2012 venues.

QEOP is such an iconic course that it is hard to resist the temptation to pick up the pace as memories of the London Olympics come flooding back as runners pass the Olympic Stadium and warm-up track, plus the ArcelorMittal Orbit, on smooth tarmac beside the waterways.

High viz is synonymous with race officials but it was Sale Harriers Manchester’s Joseph Vis who was on a high as he hammered out 32:38 for victory in the 10K race. Runners-up were M55 master Tony Tuohy (Dulwich Runners, 35:13) – fifth best in his age group this year – and Charles Micallef (M45, 35:26).

Alice Whiley (Ravens City of London, 38:58) trimmed her PB by seven seconds to win the women’s race by just four seconds from Emma Drury (39:02). Megan Taylor (Lewes AC, 39:23) was also inside 40 minutes in the battle for podium honours.

The supporting 5K, which runs concurrently with the 10K, had 226 runners well under the hour and M40 Gary James (18:07) led eight men under 20 minutes. Genevieve Huss (Herne Hill Harriers, 19:54) also breached that standard to take the plaudits in the women's race.

Sally Hancock (Good Gym), who ran the 5K in 29:50, spoke for the majority when she praised RunThrough race management on Twitter: “It was worth the early start for a very enjoyable run around the Olympic Park. Great atmosphere, festive tunes, tasty flapjack, cheery marshals and the sun was shining! Thanks”.