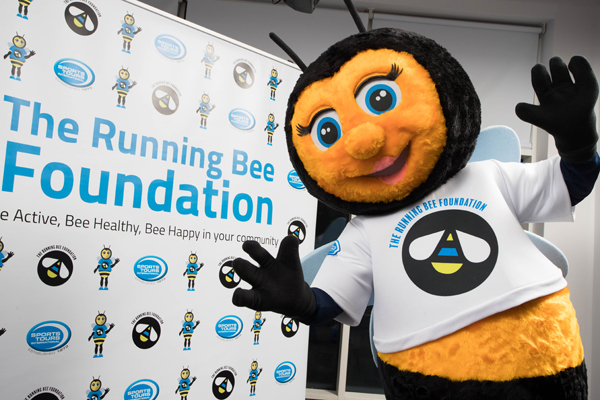 Running Bee Foundation launched to back sport in the community

Sport in the North West has a new champion! And now communities in Tameside, Manchester, Salford, Preston and Liverpool are set to benefit from support from a new project which was launched on Tuesday (6 December) at Salford's Media City.

The Running Bee Foundation is already off to a flying start with a commitment from initiative coordinator Sports Tours International to channel all of the profits from their UK running events into the new scheme. This will form the main part of a projected £50,000 pot that will be available for qualifying projects in 2019.

Awards have already been made with the Anthony Seddon Trust receiving a grant towards their work in support of the mental health and well-being of Tameside residents.

Supporting health and well-being in communities where Sports Tours International stage events will provide a focus for the new Foundation's work as will efforts to combat child obesity.

The Running Bee Foundation will have relatively modest funds initially but Sports Tours International's Chief Executive Chris Bird is aiming to see its resources grow with the help of the North West business community.

Talking at last night's launch Chris Bird said the inspiration for the Foundation was a true Salfordian, Mo Done, who had supported many Manchester charities as well as playing an integral part in the development of Sports Tours International.

Chris continued: "I’m immensely proud to have launched The Running Bee Foundation in honour of Mo Done. Our UK events have played a huge part in promoting an active lifestyle in the local communities so it’s important for us to now give something back.

"Next year, all the profits from these events will go into the Foundation to be invested back into the communities and I’m looking forward to seeing how the monies will make a difference to the health and wellbeing of our region.’’

Grants from the foundation will be available to charities, community groups and individuals in Manchester and the North West who run or are looking to run projects to make a difference in their local community, focusing on health, well-being and getting active. The maximum grant is £2,000.

To find out more visit the Running Bee Foundation website.