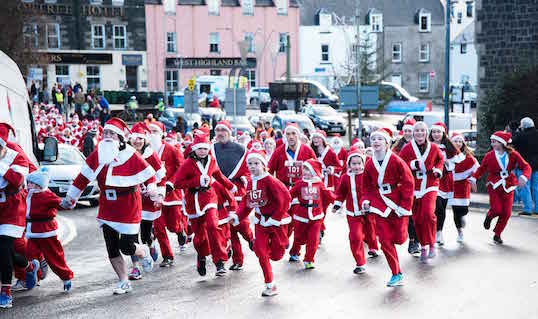 Runners looking to jingle all the way to the finish line this weekend can head to Winton Castle in East Lothian on Saturday (8 December) for the Winton Santa Dash.

Pitreavie AAC near Dunfermline will also be hosting a series of festive runs (Sunday, 9 December) for the fourth year in a row, including the Christmas Cracker Relay for adults and kids, the 1.5K Junior Jingle Bell Run and the 5K Jingle Bell Run.

Sprinting Santas will also be heading to the start line in some of Scotland’s cities this weekend too. Perth’s ‘Santa 5k’ will be held this Saturday (8 December), with Glasgow’s and Aberdeen’s following on Sunday (9 December). Runners in Aberdeenshire can also hitch their reindeers to two more Santa runs on the same day, in Turriff and Inverurie.

If the Santas of Loch Leven run as quickly as they enter races, the inaugural Santa Run at Loch Leven’s Larder – using part of the new parkrun course – (Sunday 9 December) will be just a blur of beards: the event is long sold out.

Next weekend, the streets of Portree will be a sea of red and white, as the two-mile Skye Santa Dash returns to the streets of the island’s capital (15 December).

But the festive fun doesn’t stop when the real Santa clocks off. Some parkruns have special holiday editions it’s worth keeping an eye out for: every 5k counts when trying to burn off seconds of Christmas pudding.

Runners who can drag themselves off the sofa on Boxing Day have quite a few options, too. In Forfar, there’s the ‘Plum Pudding Plod’ – where the prizes are, you guessed it, Christmas puddings – and in Ayr the 10k ‘Ayrodynamic Turkey Trot’ and its shorter 5k cousin.

Further north in Nairn is another ‘Turkey Trot’, this one well known for its unique twist: runners are asked to predict their own finish times for the 5k course. No watches are allowed on the run, and prizes are given to those closest to their predicted times.