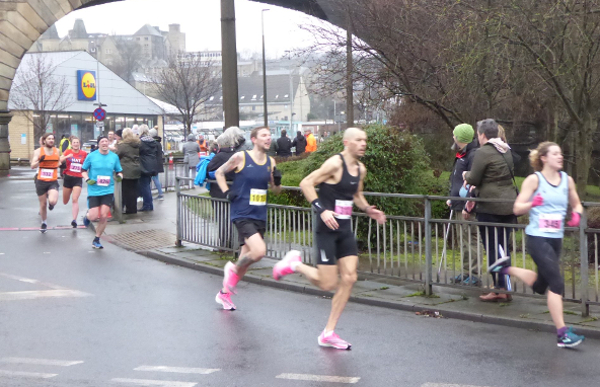 Runners up the tempo at Dewsbury

Musicians Tootni Group and Sully Khan Dhol and Northern Pacing Volunteers motivated over 2,000 runners to the finish at the sold-out Dewsbury 10K on Sunday (2 February). They moved their feet to the beat and in many cases, a new PB.

Dewsbury 10K sold out within 48 hours of entries opening - a regular occurance for this popular road race that raises thousands for charity. Organised by Dewsbury Road Runners the fast, mainly flat course is always a winner with those participants aiming for a target time whilst catering for the first timer.

This is a long standing and well organised affair from Dewsbury Road Runners whose chosen charity was Kirkwood Hospice. The Race HQ was at Dewsbury Sports Centre with the start/finish on the Ring Road, and is run on closed roads which promoted a complaint from a motorist to the local newspaper.

The subject in question - Bradford Road - was closed for two and a half hours for safety reasons. Residents and businesses had been notified in advance and signs had been put up warning about the race. The majority of people supported the 10K and its fundraising efforts.

Chris Parr of Morpeth Harriers & AC was the winner in 29:57. Mohammed Abu-Rezeq of Altrincham & District AC was second in 30:11 and Joe Sagar of Spenborough & District AC third in 30:45.

Sharon Barlow of Harrogate Harriers & AC won the women’s race in 34:45. Julie Briscoe of Wakefield District Harriers & AC was second in 35:01 with Alice Leake of Leeds City AC third in 35:05.

There were PB’s a-plenty for many and everyone received a souvenir technical T-shirt that met with universal approval.