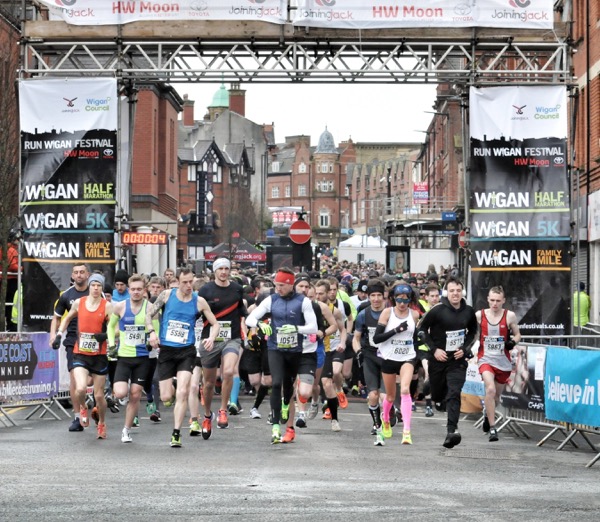 Run Wigan festival only getting busier

This year’s Run Wigan Festival, organised by the Joining Jack charity, will be a busier day than normal for the race organisers on Sunday 17 March. Already featuring a Half Marathon, a 5K and a Family Mile, this year’s event will also include a fourth distance – the brand new Wigan 10 Miler – which is proving to be a big hit with only 100 places remaining.

Organised on the back of the success of the Wigan 10K, the Run Wigan Festival was launched to complement the September 10k and provide the local community with another event.

The festival hit the ground running with 4,000 runners competing across the trio of event and organisers felt it was the right time to introduce a fourth distance to enhance the options available.

On the new event, race organiser Matt Johnson told runABC North: “We had been toying with the idea of introducing a run to bridge the gap between the 5K and the Half Marathon and we thought the 10 Mile distance would be perfect.

“The Half Marathon has proved extremely popular with runners who enjoy the challenge of the 13.1 mile distance but make no mistake, it can be a tough course. The 10 Miler takes away probably the toughest 3 miles of the HM route so it will be perfect for people looking to challenge themselves with the next stop but who are not quite ready for a half marathon.

“The response has been terrific and we are really looking forward to welcoming a new group of runners. The half marathon and 10 Miler will set off together at 9.30am with our 5k at 10.15am and the Family Mile at 1pm so it’s going to be a busy day.”

You can register for the Wigan 10 Miler here.