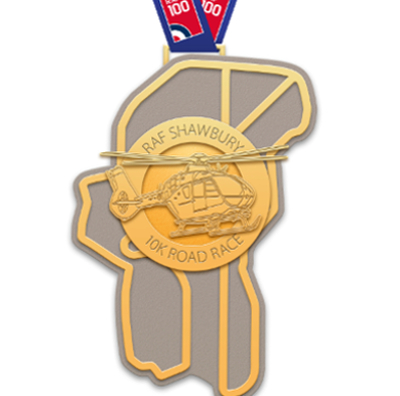 Run For The RAF At The Shawbury 10K

Runners everywhere are invited to celebrate the 100th birthday of the RAF at Shawbury Airfield. Scramble over to Shrewsbury on Sunday 9 September for the RAF Shawbury 10K.

This will be the third year of this 10K and 2K Fun Run for children aged 16 years and under and will be held on a flat, closed-circuit course which includes taxiways and runways around an operational airfield - so perfect for a PB. It starts at 10am.

It’s also an opportunity to run within the confines of an airfield that’s home to the Defence Helicopter Flying School and the School of Air Operations Control. RAF Shawbury trains around 1,000 students each year from all branches of the UK Armed Services and international partners.

2018 is the 100th anniversary of the RAF and there have been events taking place across the country to mark this centenary, paying tribute to the air force’s achievements past and present. The Shawbury 10K is one of these commemorations and also fundraises for the RAF 100 Appeal: bringing together the RAF, RAF Association, RAF Benevolent Fund, RAF Charitable Trust and the RAF Museum.

Last year’s race attracted over 400 runners and 500 spectators and was a great success. Numbers are expected to be higher this year and due to demand, entries have been increased to 750 in the 10K and 200 in the Fun Run. The event will also cater to 1,000 spectators.

Note: there is a discounted entry fee for Serving Personnel, Dependents, Contractors and MOD Civilians.