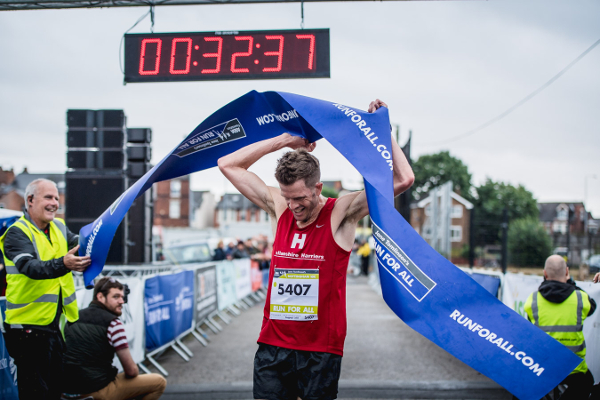 Challenger Wins Through At Nottingham 10K

Andrew Challenger proved he was up to the task with a win at yesterday’s (12 August) Asda Foundation Nottingham 10K. He and many others had plenty to celebrate including local charities.

With a flat and fast route starting and finishing Nottingham Rugby Football Club, many of those taking part were out for a pb. The attractive course took in Holme Pierrepont Country Park, home to the National Watersports Centre, where the field negotiated a timed lap of the Regatta Lake, before heading for home.

Challenger of Hallamshire Harriers AC was first to cross the finish line in 32:36. He was followed by Samuel Barnes of Serpentine RC in 33:40 with Stephen Strange of Basildon AC taking third place in 34:21.

Carolyn Hay of Redhill RR won the women’s race in 39:57. Philippa Robinson of Grange Farm and Dunmow Runners was second in 42:44 and Rebecca Miller of Derby AC third in 42:58.

This was the third outing for this popular race which has raised thousands of pounds for local charities and Sunday’s race provided a further boost. A sizeable number of runners entered on behalf of the official partner charities, for example, Macmillan Cancer Support.

Teacher Gareth Bennett wanted to repay the cancer charity for their help and advice given to him and his family during his battle with bowel cancer. He was supported throughout his treatment and recovery and since then, has taken part in fundraising events to show his support.

Natasha Matson also ran on behalf of Macmillan Cancer Support and to raise awareness of skin cancer after her father, Robert, was diagnosed with malignant melanoma in April 2017. She completed Run For All’s City of Lincoln 10K earlier this year, now followed by the Nottingham 10K as fundraisers for this charity.

There was a round of applause from Tristan Batley-Kyle, Run For All’s Head of Events who said: “Well done to everyone who completed the Asda Foundation Nottingham 10K, it was a great day for everyone involved.”

Image courtesy of Run For All.