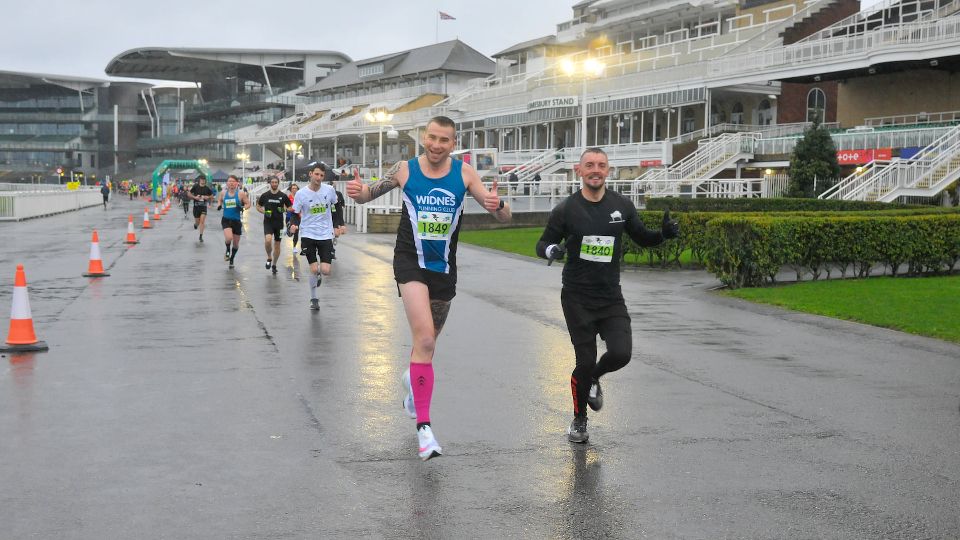 Wet and windy weather made it hard going in the 5K, 10K and Half Marathon

The Great British weather tried but failed to dampen the enthusiasm of runners, staff and marshals at last Sunday’s (13 December) Run Aintree 5K, 10K & Half Marathon. This well-organised event from RunThrough gave everyone hope for the future in regard to racing after a year when events had been sidelined.

The 5K, 10K and Half Marathon saw a range of safety measures that included start waves where runners lined up in pace order and set off in groups of four every few seconds. The half marathoners started at 10am followed by the 10K and 5K together at 10.55am.

Aintree is home to the Grand National but thankfully, runners didn’t have to jump over Becher’s Brook or The Chair as instead they galloped their way around one, two or four laps on a fast and flat circuit next to the racecourse. The only jumping would be for joy for those who made the top three and/or posted a PB: or in the case of 6-year-old Elliott running his first race, a 5K, to raise funds for Teardrops Supporting Your Community. He raised over £370 for this charity.

There was plenty of motivation from the marshals with the lady at the 12 mile marker singled out for praise due to her energy and encouragement that added an extra boost when it was needed. She was recommended for a medal and mince pie!

Results from the Run Aintree 5K, 10K & Half Marathon can be viewed on the runABC event page.

RunThrough were delighted by the weekend’s success with a Covid-safe but fun return to Aintree Racecourse for their Run Aintree event. In their words: “Runners took to the start lines in a new fashion and enjoying racing the 5K, 10K or Half Marathon whilst tackling the wet and windy weather that was in store for them.”

They look forward to welcoming runners back for the first Run Aintree event of 2021 on 16 January.