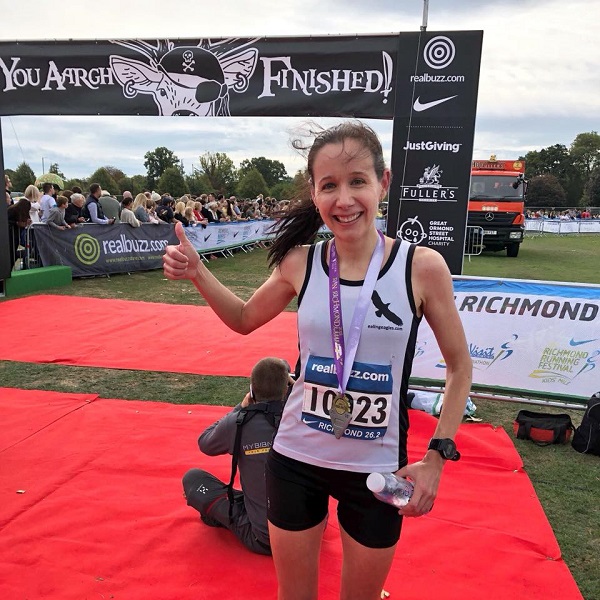 Both the marathon and half courses thread their way through parts of Kew Gardens before following the Thames Path National Trail through Richmond, Ham and Kingston and finishing in Old Deer Park, Richmond.

The marathon produced an astonishing margin of victory for the powerful front running of marathon debutant Nick Earl (City of Norwich, 2:32:33), who was more than 15 minutes clear of Rupert Allison (2:48:07) and Adam Roberts (2:51:51).

The next nine finishers all breached three hours, including the women's champion Melissah Gibson (Ealing Eagles, 2:59:51), who retained her Richmond Marathon title just 24 hours after finishing third in the Kew Gardens 10K. Gibson (pictured above) was followed into Old Deer Park by Olga Klenovskaya (W40, 3:02:10) and Lizzy Totten (3:08:13).

The weekend finished with the ever popular NIKE Family Mile and a great atmosphere in Old Deer Park at the free music and food festival with all adult race finishers able to relax with a free pint of ale.

Being the most sustainable event in its history, RUNFEST partnered with Lucozade to trial revolutionary product Ooho, gels encased in an edible and compostable outer layer; an exciting step forward to find plastic alternatives at mass-participation sporting events.

Richmond RUNFEST was created in 2013 as a London Olympics Legacy event and almost £2 million has been raised for charities and community projects in just six years. The seventh realbuzz.com Richmond RUNFEST will be held on 14-15 September, 2019.