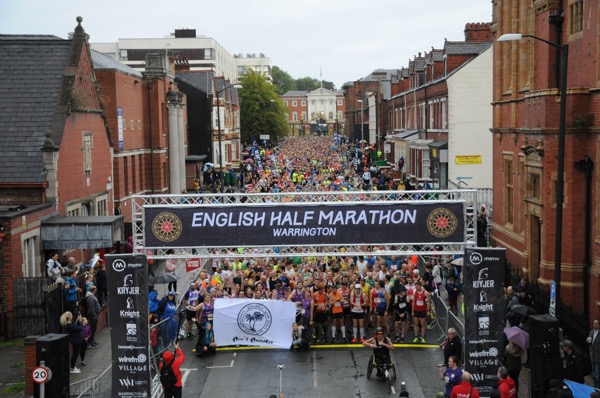 Close to 7,000 runners from four continents descended on Warrington to experience a unique weekend of racing as the event celebrated its 10th year. The festivities kicked off on Friday with the EHM 5K Night race and culminated on Sunday with the 10k and classic half marathon distance.

Indeed, the 5k provided the perfect backdrop to kick-off the competition with a stunning light display, provided by Culture Warrington, illuminating the track as runners finished the 5k around the park. Volunteers braved the cold with their glow sticks, guiding runners around the course.

In the feature half marathon on Sunday Hallamshire Harriers’ Steven Bayton was a convincing winner, crossing the line in 67:35, a time that looks set to be a PB for the runner when officially confirmed. Morpeth’s Nick McCormick took second (68:55), with Matthew Crehan third (69:08).

In the women’s competition, Catherine Carrdus of Lythan St. Anne’s Road Runners crossed the line first in 1:27:14, with Wilmslow’s Sharon Johnstone (1:27:56) and Warrington’s Louise Blizzard in second and third respectively.

The 10k, meanwhile, saw Warrington winners in both the male and female categories. Lee Fuller of Warrington Club took the men’s 10k crown with a 2-second victory over Lee Hughes, while Warrington Road Runner’s Tracy Entwistle claimed female 10k title in a time of 40:54.

Race director Rob Griffiths was in jubilant mood as he reflected on the event’s growth: “10 years of the English Half Marathon in Warrington and based on the feedback so far, I must say that this one has been the best.

“The runners have crossed the spectacular Golden Gates and raved about our army of volunteers and the very loud and supportive Warrington residents who gave them that extra bit of energy to get them to the finish line. The team and I are looking forward to building on a great weekend, as we set our sights on another 10 years in Warrington.”