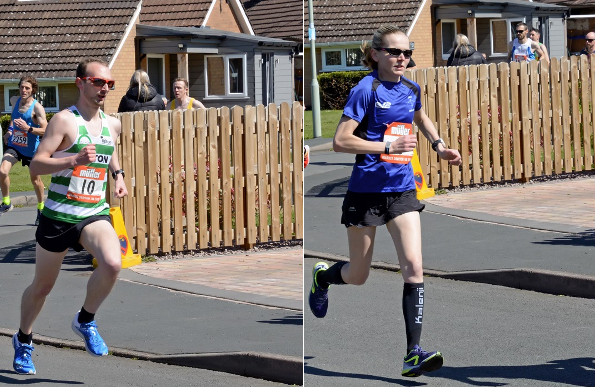 2019 is a record-breaking Market Drayton 10K

There were victories for Richard Carpenter and Kim Fawke at the Muller Market Drayton 10K (Sunday 12 May) as more than 2,700 runners took part making it the biggest ever 10K in its 15-year history.

The home of gingerbread hosted the annual race that is popular with runners near and far and was voted one of the best 10ks in the UK in 2012, 2013, 2014 and 2015. It’s become a favourite 10k for many people due to the organisation, volunteers, support and goody bag (including the famous yoghurts) and the weather played its part, with blue skies and sunshine on the day.

Kelly Sotherton was the official starter and together with the Town Crier, sent everyone on their way at 11am. The streets of this Shropshire town were lined with clapping, cheering spectators who encouraged the runners all the way. Residents offered water, sweets, fruit and hose pipes, the latter proving to be a godsend as temperatures started to rise.

Richard Carpenter of Tipton Harriers was undetered by the weather and looked in control as he headed towards the finish line to win the 2019 Muller Market Drayton 10K in 32:35. There was an 11 second PB for Jack Pickett of Wolverhampton & Bilston AC who came second in 32:47. Matt Costello was third in 32:53.

Kim Fawke of Lawley RC followed an impressive run at London Marathon with a commanding performance at Market Drayton, winning the women’s race in 37:01. Her teammate Tracie Trueman finished second in 40:37 with Jen Twine third in 41:15.

Some of the loudest applause was saved for West Mercia Police who completed the race dressed in full riot gear whilst fundraising for Severn Hospice. Puffina the Asthma Dragon and the Wolverhampton Bobsled Team both took part in the race to the delight of the vociferous support.