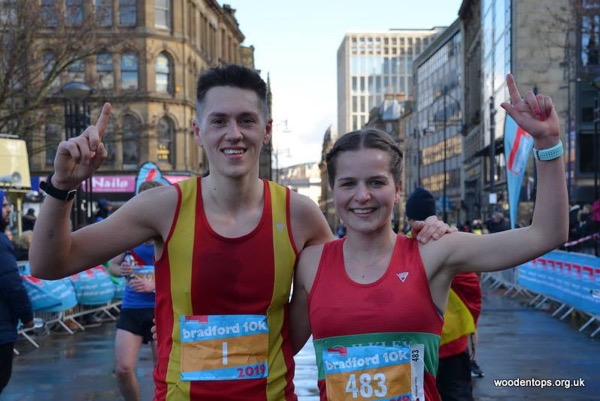 Joe Sagar made it a fabulous four at the Epilepsy Action Bradford 10K after romping to victory on what was a record-breaking day at the race. Close to 2500 completed Sunday’s (17 March) event, making it the biggest to date and a figure that bodes well for the 10k’s fundraising drive for Epilepsy.

Sunday’s field congregated at the iconic surroundings of Centenary Square for a race that is a big hit with both first-timers and those seeking a PB. It was a familiar face that claimed the 2019 title though, as Spenborough & District’s Sagar completed what was his fastest winning time at the event.

Speaking after the race, Sagar commented: “It was a really good run and I’m glad the wind died off. I’ve won it four times now and it’s a really quick course. The first year I did it there was 1,000 people doing it and now there is 3,000. The numbers seems to be doubling each year.”

Ilkley Harriers’ Jemima Elgood put in a strong performance to claim first in the female competition in 36:23, with Sophie Martin of Wharfedale Harriers second (38:44) and fellow Ilkley Harrier Katie Archer in third place (39:42).

Epilepsy Action's very own 10k, the event has raised hundreds of thousands of pounds to help improve the lives of everyone affected by epilepsy. The funds raised go directly to supporting the 600,000 people with epilepsy in the UK, 50,000 of which live in the Yorkshire and Humber area.

More information on the charity is available here. Results from Sunday’s 10k are available on our race listings page.