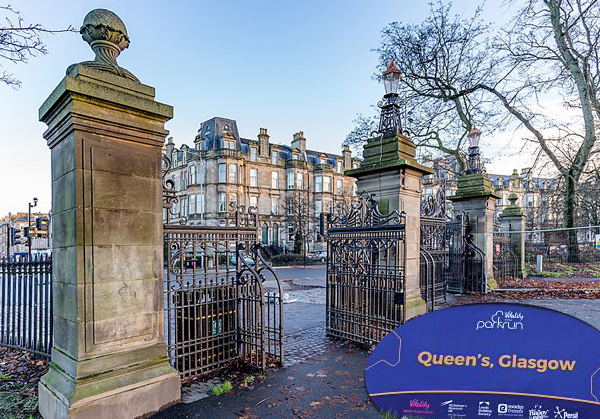 Queen of the south is parkrun success

The skies were leaden, the drizzle adding to the autumn gloom but in sharp contrast the 300 plus at the inaugural Queen's parkrun were expectant, upbeat and bright as they waited at the start line on Saturday morning (19 October).

Event director Laura Ritchie sent the field on their way to be tested by a well-thought out course in one of Glasgow's favourite parks. That course followed a zig-zag route with three inclines (the first – gentle, to get your heart pumping; the second longer and sharper; and the third, a long curving climb to the high point). Good views compensated for the challenging gradients as did the steep downhill section.

At the end of the long decline runners took a sharp right then passed the start to complete the first of three laps. So a real roller coaster where flat stretches were at a premium. However staged climbs and tree-lined paths with open vistas meant real interest around the route.

The rises and dips posed few problems for Steven Fitzpatrick who picked up the No.1 token after timekeepers Stuart Rennie and Craig Prentice clicked him on 19.10. Steven finished ahead of Bellahouston Harrier Fraser Armstrong (19:39), who led home a 20+ contingent from the local club. Jenny Brown (21:17) set the mark for the women's event while Glasgow South's Maria Doherty (22:19) claimed overall age grade honours.

Sam Huish (28:28) was the midpoint runner and the field closed on 43:11 after tail walker and regular parkrun volunteer Nick Dowley had shepherded the final few participants across the finish line.

The event team would have been pleased to have delivered a well-organised run for 313 participants. 24 volunteers, including many experienced hands, created a special occasion that augurs well for the future. Looking ahead tourists can anticipate an interesting parkrun where only a small part of the course is flat however the staggered inclines mean it's not as tough as it sounds and the long pronounced downhill gives plenty of opportunity for recovery.

Queen's parkrun is Scotland's 52nd event and follows closely on other recent additions – University of Stirling, Mount Stuart (Bute) and Dean Caste (Kilmarnock) to extend coverage of the free weekly 5k north of the border.

Check the times for the first Queen's parkrun here.