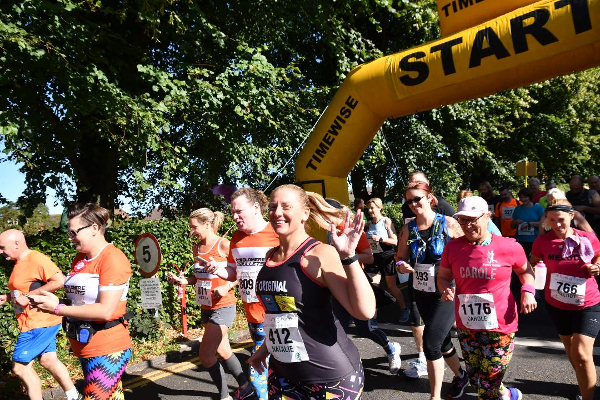 There were smiles all round at Sunday’s Lichfield 10K (8 September) as runners achieved their target times at this sold-out race. The marshals went above and beyond with their support...

The weather played its part with blue skies and sunshine at the 10K and Family Fun Run that attracted in excess of 1,000 runners to this cathedral city. Now in its 24th year, the Lichfield race has acquired a reputation as a top class event, even drawing comparisons with London Marathon in terms of its organisation, atmosphere and support.

Hosted by Lichfield RC, this race was open to both newcomers and experienced athletes looking to test themselves on an undulating course with help from a team of pacers. The latter proved to be invaluable for more than a few on the day.

Amongst the happy throng was Juan Manuel Vera Bacallado (‘El Guapo’) who had run from Tamworth to Lichfield then back home again – a total of 21.25 miles in all. This is part of his preparation for a 50 mile ultra in February 2020. Also taking part was a group from Lichfield City Casuals FC running for St Giles Hospice.

There was plenty of support along the way from volunteers and local residents. Marshals clapped, cheered and shouted out names as they passed, all of which was appreciated by the runners as well as providing a welcome boost to those near the back of the field.

Simon Birch of Hinckley RC was the winner in 32:29; Juliet Potter of Charnwood AC won the women’s race in 37:15.

There were 1020 finishers with many looking forward to next year’s race.