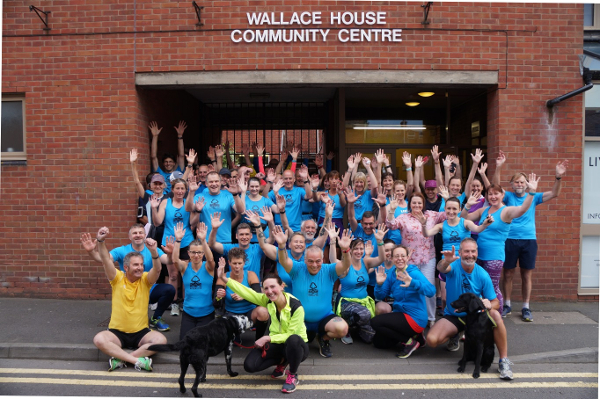 Pro-active Evesham Vale keeps its members on the run

The coronavirus outbreak and subsequent lockdown has not dampened spirits at Evesham Vale Running Club (EVRC), in fact, it’s the opposite. Members have engaged in a range of activities and stayed motivated while coming together to help local charity Caring Hands in the Vale.

Established in 2006, Evesham Vale Running Club (EVRC) is known for its friendliness and welcomes people of all ages and abilities to its weekly sessions, Couch25K, Race League and Bredon Bash. On the second Saturday of each month they organise a club tourism trip to a nearby parkrun and stage an annual 10K that raises funds for charities. This year’s event was due to support Evesham Adventure Playground and Caring Hands in the Vale but this was cancelled as a result of the global pandemic.

On 16 March all training sessions and club runs were cancelled with immediate effect to the disappointment of the members.

However the club’s ‘can do’ attitude came to the forefront almost immediately with a virtual event devised by Bob Pope and Steve Sandals titled the Social Distance Selfie (SDS) Race Series. The country went into lockdown on 23 March but this series of 10 races has been a lifesaver with more than 50 members, who post their times and selfie on the club’s Facebook page, taking part each week. Race 10 is this weekend (23/24 May) and Bob and Steve will announce the next race in the series after the weekend. Bob Pope also set up a JustGiving page for the SDS Race Series with donations to go to Caring Hands in the Vale.

Another initiative was Marcus Mumford and Tom Doggett's weekly virtual pub quiz via Zoom that has been a fun and successful event.

Week 7 (team event) in the SDS Race Series saw a group of four people post a video showing them, virtually, ‘passing a shirt’. This inspired Julian Horsley who wanted to see how many members could fit in a club video and asked for volunteers. 38 people duly obliged, sending him clips of them ‘Passing the Shirt’ that he used to produce a video and posted this to Facebook on 17 May.

There is togetherness at EVRC as stated by Julian Horsley who says: “The participation in the video showed the camaraderie that is there in the club and is something to look back on.”