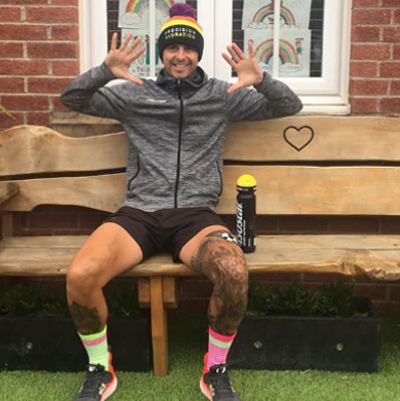 It’s a 10 for Gary & his treadmill marathon triumph

It was a towering effort from Gary Howells who completed 10 marathons in 10 days on a treadmill after the 'real' Brathay 10in10, scheduled to start on 8 May, was cancelled. The Welsh Coast Runner showed good judgment of pace across the 10-stage challenge as each marathon was faster than the previous.

Gary's journey started on Friday 8 May and ended on Sunday 17 May with 3:13:49 for his last marathon and a tired, aching body but a warm glow of satisfaction and immense gratitude for the support shown by his club and many others.

Treadmill marathons were not on his agenda when he was preparing to take on the Brathay 10in10 on 8 May but the coronavirus outbreak led to the event being postponed. Lockdown and the restrictions on outdoor exercise meant a switch to running on his home treadmill and that was where he conceived the idea for a ‘Virtual Brathay 10in10’ and raise money for the Brathay Trust and NHS charities.

His club Welsh Coast Runners organised their own #10in10 event, undertaking their own challenges in 10 days to support Gary and the NHS.

Every marathon was filmed as Gary provided a running commentary and these were uploaded to his Facebook page each day. Club members, family and friends posted messages of encouragement and admiration for his efforts that he acknowledges: “Kept me motivated throughout.” This was every bit a mental battle as a physical one especially on the 10th and final day when he had to push through pain to finish.

Gary thanked everyone who donated and supported him during his 10in10 challenge and is hopefully, taking a well-earned break to recover.

He was single minded in his goal of running 10 marathons in 10 days saying: “I can, I will, just watch this!”