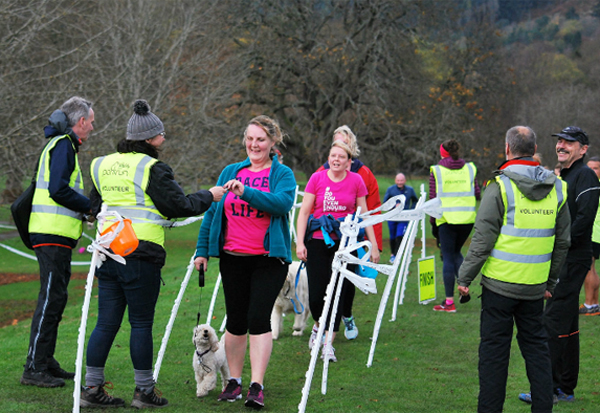 parkrun arrives in the Scottish Borders

Parkrun number 43 arrived in Scotland last weekend with the launch of the much-anticipated Hay Lodge parkrun in Peebles.

When Martin Kelso sent 149 runners, joggers and walkers plus assorted dogs and buggies on their way at 9.30am last Saturday (3 November) Scotland's latest parkrun was up and running. After three years of groundwork the Peebles team had finally got the show on the road. And a pretty impressive show it was too!

The weather was: "a bit wild but, if anything slightly better than forecast" and the enthusiastic field 'enjoyed' a testing three lap course in windy conditions that included a series of climbs and descents.

Carnethy Hill Runner Konrad Rawlik set the course record (men) at 17:36 and Corstorphine AC's Gillian Carr (21:44) posted the fastest female time. Christine McLeod took the mid-point place in a reasonably sharpish 27:08 and the timekeeper stopped their watch on 50:13 when the tail walker crossed the line.

No landmark parkrun is complete without cake and the contribution from run director Claire Mathieson was widely appreciated post-race.

Hay Lodge is the 10th new Scottish parkrun of the year and it comes ahead of the celebrations for 10 years of parkrun in Scotland. Also time is running out for those runners who wish to mark the 10th anniversary by completing the successful '10 in 10' challenge.

Since the challenge began dozens of Scottish parkrunners have taken in part in events other than their home parkrun and a handful, via running and volunteering at both senior Saturday events and junior Sunday events, have completed multiple '10 in 10s'.

The Hay Lodge parkrun participants included blogger and parkrun uber-enthusiast Davie Black. Davie gave the course and set-up the thumbs up but saved his biggest compliments for the cake: "Aw man it was just like you might remember your Granny making, proper tasty home baked mouthfuls of tasty tastiness."

Douglas Mason and Craig Walker thought they had successfully competed their challenge to take part in every Scottish parkrun during 2018 two weeks ago but were in attendance at Hay Lodge to keep their record intact. Check out Douglas's video account of the run on YouTube.